In our latest Black History entry, we explore the role played by Black Soldiers during the American Civil War.

The recruitment of Black Slaves in the Civil War presented a dilemma for the young American nation, and it would eventually serve as a catalyst for the emancipation of Slaves through the promulgation of Abraham Lincolnâ€™s Emancipation Proclamation on 1 January 1883.

The Southern Plantation States were heavily reliant on Slave labour, and its no surprise that the South was the first to incorporate Black Slaves into the Confederate Army.

However, they were mainly recruited for the performance of exhausting menial tasks like trench digging, cooking and transportationâ€¦Essentially as logistical support for the Southern Army.

Nevertheless, it did not go unnoticed by the North that Slave labour improved the capacity and strength of the South, and for this reason, it became essential for the North to consider recruiting Slaves in its own ranks in order to improve its strength against a Slave-assisted Southern Army.

Whilst this seemed like a practical solution, there was resistance amongst Whites in both the North and the South to the idea of officially arming and recognising Blacks within the official ranks of a legitimate State Army.

The Road To Emancipation

As the War intensified, it became necessary to boost troop numbers and a compulsory military draft was introduced in the North which was met with intense protest and riots in New York.

The resistance to the to the draft coupled with the ongoing demands of the War with the South forced the North to reconsider its attitude towards the recruitment of Black Slaves as Soldiers.

The result was President Lincoln’s Emancipation Proclamation issued in January 1883 in terms of which all Slaves in the North and South were deemed Freemen, and were thus eligible to be drafted in the US Army as Citizens.

Reasons For Black Involvement In The Civil War

African Americans had their own motivations for wanting to enlist in the Northern Army.

They had already been indirectly assisting the North by deserting their posts in the Southern Army whenever the opportunity presented itself.

Furthermore, spurred on by Abolitionists and Black leaders like Frederick Douglas, African Americans joined the Army as a means of proving their worth and place as deserving Citizens of the new America. 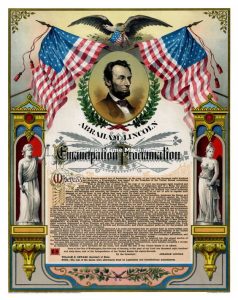 It was an opportunity to prove their loyalty and right to belong in the new land in which they had found themselves forcibly relocatedâ€¦Serving in the Army was therefore cast in terms of paying the â€˜debtâ€™ to be accepted as equal Citizens in America.

The interests of the Northern States and the aspirations of African American Slaves therefore converged in a manner that would pave the way not only for the inclusion of Blacks in the Army, but for the establishment of a new America in which Blacks and Whites were seen as equal contributors to the American project.

Black Units were recruited, trained and placed in the field to fight for the North, and thereby provided the support that was instrumental in tipping the scales in favour of the North.

The South attempted to adopt the same policy of Black conscription in the latter phase of the War, but by then it was too late as the North had already managed to gain an irreversible advantage.

In the end, the North won the War and the Union was preserved.

Despite their role in the Union Army however, a racialized system of Segregation or Jim Crow was introduced after the Civil War, rendering the Emancipation Proclamation as well as the â€˜free and equalâ€™ Society imagined and fought for by Black American Soldiers nothing more than a pipe dream.

It would take until the 1950s Civil Rights Movement to realise the hopes and dreams of the Black Soldiers that had participated in the Civil War.

Nevertheless, the Civil War provided an opportunity for American Slaves to advance a step forward in the journey towards their full emancipation despite the betrayal that immediately followed the War with the institution of Jim Crow Laws.

Black Army Units such as the 54th Massachusetts Infantry Regiment were even recognized for outstanding Military Service, and its safe to say the North may not have won the War without Black Soldiers, or at the very least that the American Civil War would have lasted longer without Black Soldiers laying down their lives for the Â cause of the North, and inclusion in the American dream.

For more on Black Resistance and History, you can check out our Article Archive here: