The Kushite Nubian Pharaohs Of Egypt

The story of Egypt’s Black Pharaohs from Kush was almost extinguished by the Assyrians following the Assyrian conquest of the 25th Egyptian Dynasty when they attempted to erase Kushite Nubian Kings from History by removing their names from Ancient Egypt’s monuments.

In spite of the Assyrians, the legacy of the Kingdom of Kush was simply too great and enduring to be erased from History.

Origins Of The Nubian Dynasty

During the period of Egypt’s Old and Middle Kingdoms the Nubians were based in the settlement of Kerma in Northern Sudan (Upper Nubia).

As Kush gained in confidence, its Kings progressively ruled independently of Egypt and established Napata as the new Capital of Kush.

The Establishment Of The 25th Nubian Dynasty In Egypt

The rise of Kush and the establishment of a new Capital at Napata, coupled with the decline of the New Kingdom provided the opportunity for the Nubians to take control of Egypt.

In the 8th Century, the Kushite King Piye conquered Egypt and established the 25th Egyptian Dynasty in 727 BC.

Piye was followed by a succession of Nubian Rulers until they were deposed by the Assyrians.

During the time of the Black Nubian Dynasty great building projects were carried out in Egypt with special attention being given to the City of Thebes which became the Capital of the Nubian Dynasty.

The Nubians also consolidated Egyptian power by exercising control over both Upper and Lower Egypt restoring the Ancient Egyptian Culture, Power and Prestige that had been lost with the fall of the 24th Dynasty. 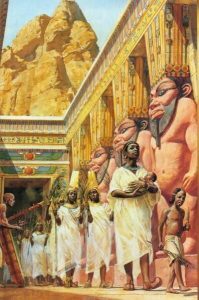 The result was a new blend of Egyptian and Nubian Culture that reflected the Historical relationship and contact between the peoples of Kush and Ancient Egypt.

This cultural renaissance was expressed in the monuments and artworks of the 25th Dynasty, some of which have been preserved to this day.

Historically, a testament to the strength of the 25th Nubian Dynasty’s army is contained in the Bible’s account of the Assyrian advance on Jerusalem during the reign of King Hezekiah who was assisted by the Kushite Army in repelling Assyrian King Sennachrib’s siege of Jerusalem.

Decline Of The 25th Nubian Dynasty

The Kings of Kush were deposed from the Egyptian Throne in the Assyrian invasion of Egypt by King Ashurbanipal in 671 BC.

Thereafter the Kushite Kingdom survived in Nubia, and the Capital was subsequently moved to Moroe which would also become a great City in its own right until it was invaded by the Axumites who dealt a major blow to the Kingdom of Kush circa 330 CE.

After the destruction of Moroe, the Kingdom of Kush continued for about twenty years ending circa 350 CE when the City of Moroe was eventually abandoned marking the end of the Black Kushite Kingdom that had once risen to the heights of the Egyptian Throne. 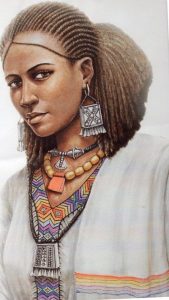 Check out out the article archive and join our Facebook group on the links below: