The Battle of Adwa represents one of the few African victories against the forces of Colonial Expansion.

More importantly, unlike other victories such as the Zulu victory against the British at Isandlwana, the defeated Italian Imperialist Army did not follow up the defeat with a more decisive military campaign that would eventually achieve the objective of Colonization.

The Battle of Adwa was therefore not just a temporary setback to the Italian conquest of Ethiopia but it resulted in Italy’s withdrawal from Ethiopia, and the establishment of Ethiopian Independence.

Background To The Battle Of Adwa

The Berlin Conference of 1884-85 designated Ethiopia as an Italian Zone of influence.

Meanwhile Menelik II had risen above the internal rivalries within Ethiopia and claimed the Ethiopian Throne following the death of Emperor Yohannes IV in 1889.

In 1889 Menelik II concluded the Treaty of Wuchale with Italy in terms of which in exchange for money, 30 000 Muskets and 28 Cannons, Menelik granted the area now forming modern day Eritrea to the Italians.

Unbeknownst to Menelik, Clause 17 of the Italian version of the Treaty subordinated Ethiopia’s Diplomatic and Foreign Policy to Italy.

When Menelik discovered this, he addressed the Italians on this aspect of the Treaty calling it a humiliation on his Kingdom.

As a result, Ethiopia repudiated the Treaty of Wuchale.

Menelik II’s repudiation of the Treaty gave the Italians a pretext for War, and an expedition to invade Ethiopia under the command of General Baratieri was composed and dispatched.

The Battle Of Adwa

The Italians began invading from the North and, Menelik II began a counteroffensive from the Southern Provinces gathering Troops in every Province as he proceeded North to enage the Italians.

Menelik’s forces numbered 100, 000 men, and they were well equipped and trained in the use of the modern rifles and artillery that had been acquired from the Italians.

When the two Armies met, there was a brief stalemate as each waited for the other to  commence the attack. 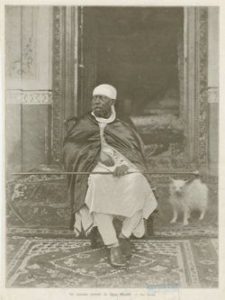 In the end, under pressure from Colonial Government Officers in Italy, Baraitieri initiated the attack with an advance towards Menelik’s camp.

However, the advance was poorly co-ordinated, and soon confusion wreaked havoc in the Italian ranks.

As a result, Menelik II’s well equipped and trained forces were able to overwhelm and route the Italian Army in 3 separate engagements as the defensive line of the desperate Italian forces collapsed.

Panicked and disoriented the Italins began a hasty retreat towards Eritrea.

Conclusion: Legacy Of The Battle Of Adwa

Menelik II’s monumental victory at Adwa was significant in that it led to the international recognition of Ethiopia as a sovereign State at the height of the scramble for Africa.

In addition, Ethiopia was unified under Menelik’s rule as Emperor.

Perhaps most importantly, Ethiopia made Africans realize that Colonialism was not inevitable, and it served as inspiration for the anti-Colonial Nationalist resistance movements that would eventually undo the Colonial conquest of Africa.

Next up is our African Nationalism series, and  for more entries on Colonial resistance, you can check out our Black Resistance & Struggle Archive here: