Known as the Royal Science in Ancient times, Astronomy dates to Ancient Sumer in the Second Millenium BC.

Its the first known system of Astronomy which would later evolve into a system of divination we now understand as Astrology.

Made up of Two Tablets comprising a Catalogue of 71 Stars and Constellations including the Sunrise and Sunset times of these Stars and constellations, the Assyrian Mul.apin Panel is the earliest record of Mesopotamian Astronomy dating back to the 7th century BC.

The Enuma Anu Enlil is also another important Astronomical Tablet which reveals the shift towards Omen-based Astrology.

Intitially Mesopotamian Star Charts did not accurately predict Planetary movements, however an accurate system was eventually developed in Babylon.

Their observations of the Sun, the Moon as well as the order of Planets and Constellations remain accurate even by modern standards..

Shift From Astronomy To Astrology

Babylonian Astrology identified the Stars with a Deity or a God, and they invented the 12 Constellation Zodiac which succeeded in effectively combining the Astronomical Scientific observation of Star positions recorded in the Ancient Star Charts with Astrological divine interpretations.

The Babylonians would eventually develop two Systems, a Normal Star System and the Zodiac Star System.

With the passage of time, Astrology and Astronomy became the same science. 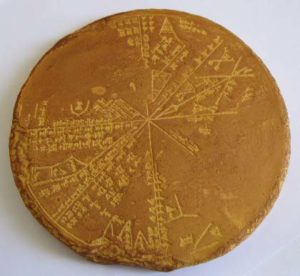 The Divination that characterised Astrology was used to communicate with the Gods who were believed to shape human fate and that of the Cosmos.

Omens were deduced from the Celestial Motions and their effect could be ameliorated by following certain rituals or making offerings to the relevant Planetary God.

Babylonian Astrology subsequently spread to Greece at the beginning of the 4th century BC.

After the Greeks, Astrology was adopted by the Romans, and Arabs from where it spread to the whole world.

0 replies on “The Ancient Origins Of Babylonian Astrology”