Dr Credo Mutwa is one of the people who has revealed Africa’s link to the Aliens of the Ancient Astronaut Hypothesis. Based in South Africa, Baba Vusamazulu Credo Mutwa is a Zulu Sangoma (Traditional Healer) who has also written stories that weave together Zulu folklore and Alien encounters.

His journey into the world of Extraterrestials began after falling severely ill in his teenage years, and orthodox Western Medicine failing him, then his grandfather brought him back to health by taking him to recieve treatment from a Traditional African Healer.

The episode ignited a spiritual awakening, and at this point Baba Mutwa began to question many of the negative stereotypes and portrayals of African Spirituality perpetuated by Missionaries.

His grandfather instilled in him the belief that his illness was a sacred calling, which meant he was destined to become a Sangoma.

He subsequently went through and passed his intiation as an African Spiritual Healer which involved an intriguing incident where he describes an Alien abduction in the sacred mountains of Zimbabwe as part of the initiation.

Baba Mutwa provides extraordinary insight into the History of Alien intervention in Africa.

He chronicles Africa’s most ancient times in which Africans did not use speech but instead used Telepathy to communicate with each other and nature. 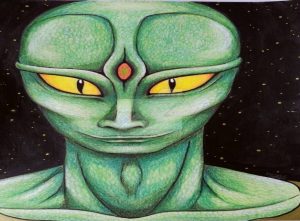 According to Baba Mutwa, these Telepathic abilities were diminished when speech was introduced by a species of Reptilian Alien beings he calls the ‘Chitauri’ or ‘the Talkers’, who according to the Ancient teachings of African Mystics arrived to mine Gold in Southern Africa.


The most striking aspect of this tradition is how similar it is to the Annunaki Alien Ancient Astronaut Theory proposed by Zechariah Sitchin although there is no traceable contact between the African Mystic Tradition and the Sumerians in recent history.

Ultimately, Baba Mutwa’s body of knowledge and wisdom on the history of Alien involvement in Africa is worth considering, particularly because it was passed onto him as part of Spiritual Training and Initiation as an African Traditional Healer.

This means the idea or concept of Aliens is not foreign to African knowledge and understanding, which would not be surprising taking into account other traditions elsewhere in Africa such as that of Mali’s Ancient Dogon Tribe that also record Africa’s ancient encounter in the past with Extraterrestrial ‘wise Teachers’ from the Sirius Star system.

In 1974, Baba Mutwa also acquired land in Soweto where he established an African cultural village that relates the story of Africa’s Ancient past and its alleged encounter with otherworldly entities from the deep reaches of the Cosmos.

Check out his interview with David Icke below, and come to your own conclusions as always.

Baba Credo Mutwa On The Chitauri Aliens Of Africa