The technology used to lift the over 800 Tonne stone blocks used to construct the Ancient Baalbek Temple remains unexplained.

Whilst its possible to trace Baalbek’s history to about 8000 BC and into the Phoenician period, its also possible that the Baalbek is older than this.

It’s generally accepted that the stone ruins of Baalbek date back to the Canaanite period, and it was probably a site for the veneration of the Canaanite Supreme God Baal as its name would suggest.

Subsequent periods of Greek, Roman and Islamic occupation of Baalbek occurred until the area fell within the control of the Ottoman Empire during the 16th Century, whereafter it became part of the modern Lebanese Republic.

In renaming the Site Heliopolis, the Greeks recognised it as one of the main centers of worship.

In addition to the construction carried out by the Greeks and Romans, signs of which are still evident from the site as part of the Ancient Baalbek Ruins, the earlier Baalbek Temple platform which served as the foundation on which the later Temples were constructed has not been adequately explained.

This older part of Baalbek was constructed using giant Stones weighing at least 800 Tonnes each.

In addition, abandoned massive stones have also been discovered near the Baalbek site. How these huge stone blocks were cut and moved to the main Baalbek Temple site with the technology available at the time is also not fully accounted for.

As a result, alternative explanations have been proposed for the origins of Baalbek.

Sitchin and Hancock propose that the Stones at Baalbek suggest that Baalbek is much older than is generally accepted.

According to Hancock, the key to the Baalbek puzzle lies in appreciating that the construction engineering challenges posed by the stones used to construct Baalbek suggest that it could not have been accomplished by the Canaanites, Romans and/or Greeks

An earlier more advanced Lost Civilization with the necessary technology to move the Baalbek stones was therefore probably responsible for Baalbek although Hancock doesn’t go as far as identifying it. 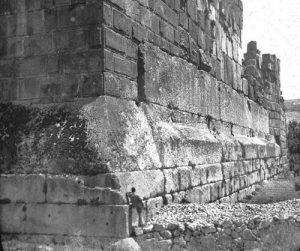 Sitchin on the other hand points to the ancient Sumerian record in particular, the Epic Of Gilgamesh in which Gilgamesh King of Uruk embarked on a quest for immortality that took him to Baalbek so he could board a Shem or Rocket to the Planet Nibiru, home of the Anunnaki Gods so he could also obtain the eternal life of the Gods.

According to Sitchin, Gilgamesh witnessed Rockets being launched from Baalbek in The Epic of Gilgamesh, and for this reason Sitchin argues that Baalbek was actually an Anunnaki Alien Spaceport.

This would explain the use of the massive Platform stones and also resolve the question of the source of the technology required to move the giant stones used to build Baalbek.

There is good evidence to suggest that the Roman and Greek Temples at Baalbek were built using the remnants of an earlier more Ancient Temple as a foundation.

However, how this earlier more sophisticated and technologically challenging Foundation made of giant Stone Blocks was itself built, who built it and why, remains an unresolved question open for debate.

So far the Lost Civilization and Ancient Astronaut Theories offer some insight on the question with Sitchin going as far as to suggest that the answer is already available from Sumerian literature like the Epic Of Gilgamesh.