Iranians did not consider Ayatollah Khomeini a villain because to Iranians, the 1979 Iranian Revolution led by Ayatollah Khomeini was a response to Western Imperialist inteference in the internal affairs of Iran since Oil had been discovered in the region in 1908.

In addition, Ayatollah Khomeini was regarded as a Hero leader rather than a Villain by Iranians because he rejected the Shah’s attempts to entrench his own power through domestic reforms that promoted Western liberal secular values at the expense of what was perceived as Iran’s conservative authentic Islamic identity.

The Reign Of The Shah

The roots of Ayatollah Khomeini’s leadership of the Iranian Revolution as either Villain or Hero occured in the broader context of Iran being a of the Persian Empire dating back to Cyrus the Great.

The Islamazition of Iran occured after the Muslim conquest of Persia, and in 1501 the Safavid dynasty made Shia Islam the official Religion of Iran under the first Shah Ismail.

The autocratic rule of the Shah continued until 1906 when Iran became a Constitutional Monarchy, and the discovery of Oil in 1908 by the British Petroleum Company resulted in inceased Western interest in Iran.

Following a period of internal Political unrest in Iran after World War 1, the old dynasty was replaced by a new dynasty under Shah Reza Khan after staging a Military coup.

However, in 1941 Shah Reza Khan was overthrown by the Allies during World War 2, and in his place they installed his Son Mohammad Reza Shah who was to become the last Shah of Iran.

Mohammad Reza Shah’s rule was problematic from the outset because he had been put in place by Western Powers who sought to secure Iran’s Oil supplies and to use it as a base during World War 2.

In addition, from 1951-53 the Shah was embroiled in a Constitutional Crisis involving Prime Minister Mohammed Mosaddeq who sought to further curtail the Shah’s powers by bringing the Shah under the firm control of Parliament.

Mossadeq was the head of a Nationalist Movement giving voice to the wave of Iranian Nationalism which had resulted in a Parliamentary vote to nationalise Iran’s British controlled Oil industry.

The ongoing Political unrest eventually forced the Shah into exile in 1953.

However, the CIA swiftly intervened by conducting an operation that resulted in the arrest and removal of Mossadeq from office and the re-installation of the Shah. 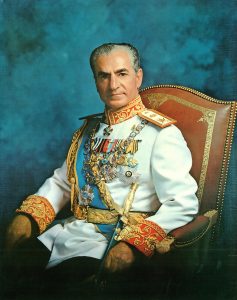 As a result of these events, the Shah was perceived by a significant portion of the Iranian population particularly the Shia Muslim Clerics like Ayatollah Khomeini as a Western puppet.

On his return, the Shah went on the offensive with reforms that sought to liberalise and modernise Iranian Society  as well as to undermine the power of the Shia Clerics.

The Shah’s land and Social reforms gave land to Peasants and the vote to women amongst other things whilst painting a thin veneer of modernity over Iran.

The reforms were not far reaching enough as the majority of Iranians did not benefit from the economic reforms, and the Social reforms were seen as a Westernisation of Iranian Society that corrupted its traditional Islamic values and identity.

In addition, whilst the Shah saw himself as a reformer in line with Iran’s ancient Pre-Islamic heritage, he was increasingly isolated from the Islamic majority under the influence of the Shia Clerics.

This became particularly pronounced after the Shah held a lavish ceremony for world leaders in 1971 celebrating Iran’s 2500 years of Persian heritage dating back to the era of Cyrus the Great.

The Rise Of Ayatollah Khomeini

Dissatisfaction with the Shah’s leadership opened space for the Muslim Clerics led by Ayatollah Khomeini who voiced their discontent with the Shah’s rule and Western style reforms.

In 1963 Ayatollah Khomeini was villainsed and arrested after publicly denouncing the Shah.

However, Ayatollah Khomeini was soon released and then re-arrested again in 1964 after protests and Political unrest caused by his continuing critcism of the Shah and the oppressive Political regime epitomised by the brutal intelligence agency SAVAK.

Despite being labelled a villain by the Shah, whilst in exile in France, Ayatollah Khomeini continued to lead the Iranian Revolution by organising resistance against the Shah as Ayatollah Khomeini sent protest recordings to Iran which were widely distributed by the influential Shia Clerical network.

These recordings had a major impact and helped organise a strong grassroots resistance movement against the Shah and contributed to the rise of Ayatollah as a Hero leader amongst Iranians.

Meanwhile in Iran the Shah’s grip on power continued to weaken as protests and demonstrations repeatedly called for domestic Political reforms.

As a result of the internal pressure, The Shah soon went into exile again in 1979, but this time the CIA did not come to his rescue.

On his return, the Islamic Republic Of Iran under Ayatollah Khomeini’s leadership was declared.

The control of Iran’s Oil Reserves was a significant factor and by successfully deposing the Shah Of Iran who had been in put power by the CIA in order to protect America’s strategic Oil interests in Iran, Ayatollah Khomeini was not a villain to the Iranian people but instead a Hero Liberator Leader of the Iranian Revolution who helped Iran to confront the challenges posed by Neo-Colonialism under the indegenous banner of Islam.