Zecharia Sitchin’s interpretation of the word ‘Ánunnaki’ as denoting ‘those who from heaven came’ has widely been criticised as incorrect and this criticism can also be applied to mean that he misinterpreted the word Anunnaki as denoting Sumerian Ancient Astronauts when it was a reference to the Anu Twa Pygmy people who may have been amongst the first people to settle Ancient Egypt.

A Green Glazed Nubian Carving dating to at least 3 100 BC found at the Temple at Abydos depicts and describes a Black “Anu” Man as a “God Of The Earth of the Annu People’s of the God Set”.

Set was served by the Priesthood of the BaTwa Pygmy Bes, who is amongst the oldest Egyptian Gods.

Even the earliest depictions of the Egyptian Deity Ptah in the South showed him in the form of a Dwarf.

Anu Dwarves or Twa Pygmies are also carved into the Narmer Palette , the Founding Document of Egypt’s First Dynasty where they are shown as Priests leading the Royal Victory procession holding up the Royal Insignia.

The above provides another reason to doubt Zechariah Sitchin’s translation of Sumerian Texts relating to the Anunnaki in support of his Ancient Astronaut hypothesis on the creation of Man, and the enslavement of mankind to work in Gold Mines.

Alternative translations of these Sumerian Texts indicate that they have nothing to do with space travel or the Anunnaki as Ancient Astronauts and that in addition to these perhaps we should also interpret the Anunnaki as a reference to the Twa Anu Grimaldi Peoples who later migrated from the African interior.

The Anu can further be considered the Founders of Civilization because they were the progenitors of the Nile Valley Culture which led  first to the Kushite Nubian Naqada Culture and then the establishment of Egypt by Narmer when he united Upper and Lower Egypt after which the City of Memphis was built.

It should also be noted that the Egyptian word “Anu/Aunu” means Sky-God from above. The Igbo equivalent is “Anu” meaning “from above, up, sky, heavens”. 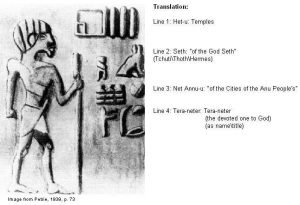 Dr Clyde Winters further claims that Nu  is (Akkadian: ANU, from An “Sky”, “Heaven”) or Anum, originally An (Sumerian: was the divine personification of the sky, king of the gods, and ancestor of many of the deities in ancient Mesopotamian religion.

Anu was also regarded as the Divine Source of Human Kingship.

According to the earliest Egyptian traditions Osiris was also an Anu.

It is the Anu who invented architecture, writing , irrigation and dry agriculture in the Nile Valley.

The story of the Anu may therefore be the story of mankind’s evolution in Africa before and during the migration of Grimaldi Man.

Grimaldi Man’s footprints exist across the entire world in the form of Bone Fragments, Stone Tools, Carvings and Cave Art.

In Africa, after 4000 BC, the Anu civilization was progressively absorbed by the Kushites who would go on to found Egypt, the legacy of the Anu that remains with us today.

The word ‘Anunnaki’ misinterpreted by Zechariah Sitchin may therefore actually be a reference to the Pygmy Founders of Civilization whose descendants can still be seen in the Khoisan people of Southern Africa and the Twa People of Rwanda today.

0 replies on “Are The Pygmy Twa Anu People The Real Anunnaki?”