Suprisingly, the same story also forms part of Traditional African Mythology which was revealed in an interview between David Icke and Zulu Traditional Healer and Educator Credo Mutwa on Africa’s Chitauri (‘The Talkers’) Reptilian Aliens.

The Anunnaki Gold Mines Of The Abzu In Africa: The Sumerian Lower World

The Abzu has been described as the Sumerian Lower World which is in Southern Africa where the Anunnaki Gold Mines were located.

The Ancient Astronaut Hypothesis claims that the Sumerian Lower World refers to the Earth’s Southern Hemisphere where Africa is not located and that the term ‘Lower World’ should not be confused with the Greek conception of a Netherworld or Hades.

For this reason, the description of the Abzu as the ‘Lower World’ in the Sumerian Texts should be understood as a reference to the division of the Earth along the Northern and Southern Hemispheres which would also suggest that the Abzu or Lower World of the Anunnaki Ancient Astronaut Alien Gods was in Africa.

The Abzu of the Earth’s Southern Hemisphere in Africa is undoubtedly the site at which the main Gold mining activities of the Anunnaki Ancient Astronaut Gods were conducted.

The story of the creation of man or ‘Primitive Worker’ through Genetic Engineering by combining the DNA of Hominids like Homo Erectus with Anunnaki DNA following the Igigi Rebellion is also recorded as having occurred in the African Abzu.

In addition, Ancient Astronaut Researchers contend that the Anunnaki Gold Mining Operations that were set up in the Abzu were in Southern Africa which included the territory of Great Zimbabwe. 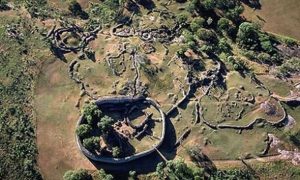 This perhaps explains why Southern Africa still produces most of the World’s Gold today with Ancient mysterious unexplained Mines and Shafts being discovered throughout Southern Africa by Mining Companies like Anglo-American.

The general consensus amongst Ancient Astronaut Theorists is that the Abzu was located in the Earth’s Southern Hemisphere in Africa, and that the events described as having occurred there prior to the Great Deluge/Flood such as the Igigi Gold Miners Revolt which led to the creation of the Primitive Worker or Humans all happened under Enki’s supervision in the area the Anunnaki Ancient Astronauts called the Abzu which was in Southern Africa.