Our next entry in the Pre-Colonial African Resistance Movements series is the Anglo-Ashanti Wars Of Resistance to British occupation.

Prior to the arrival of the British on the Gold Coast, the Ashanti Empire was already an established power on the African Continent.

Founded in the 17th Century by Osei Tutu, the Ashanti had since developed a strong military and economic base built on the trade in Gold and later Slaves.

Its therefore not a surprise that it would take 5 Wars fought over 75 years between 1823 and 1902 for the British to deal a decisive blow to the Ashanti Empire and thereby consolidate the conquest of the Gold Coast. 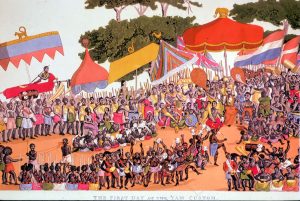 Causes Of The Anglo-Ashanti Resistance Wars

The cause of the Anglo-Ashanti Wars can be found in the abolition of Slavery.

Following abolition, British involvement and interest in the Gold Coast increased as the British sought to gain a foothold on Trade in goods like Palm Oil, Cotton and Rubber from within the African interior.

The British sought to establish Trade in the excess produce of the Industrial Revolution which had prompted the shift from the Slave to the ‘legitimate’ trade based on the new Consumer goods produced by British Industry.

In pursuing this Trade, the British became involved in the internal rivalry between the Asante and Fante over control of trade routes, and they were able to strengthen their position due to the internal African conflicts by forming a Military alliance with the Fante against the Ashanti.

Outbreak Of The Anglo-Ashanti Resistance Wars

The First Anglo-Ashanti Resistance War was fought in 1823 when the British intervened in a territorial dispute between the Ashanti and Fante.

Thereafter, a series of indecisive bitter Wars were fought until finally in 1900 the War of the Golden Stool broke out after a British representative Sr. Frederick Mitchell Hodgson insulted the Ashanti by sitting on the Golden Stool,the most sacred symbol of the Ashanti State.

The act was viewed as provocative and sacrilegious by the Ashanti, and a fierce rebellion in which the casualty count was higher than in the previous 4 wars occurred.

Despite the fierce revolt, the British subdued the Ashanti and sent the leaders into exile in the Seychelles.

This marked the end of the Ashanti Kingdom and consolidated British control of the Gold Coast. 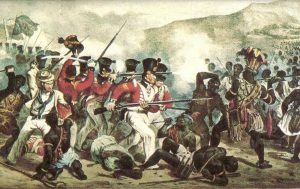 Causes Of The Failure Of The Ashanti Resistance

The backdrop to the fall of the Ashanti Empire is the shift from the Slave Trade to the trade in European Industrial Consumer commodities.

In search of markets for the excess produced by the Industrial Revolution, the British were able to gain a foothold through the pre-exisiting rivalries and divisions amongst African Kingdoms.

The Fante alliance coupled with British Military superiority and advances in European Medicine provided the British with the benefit of Quinine, a new drug made possible by the Industrial Revolution that provided greater resistance to Tropical diseases like Malaria, and thus boosted British Manpower and resources within the African Interior.

Legacy Of The Ashanti War Of Resistance Wars

As with most African Pre-Colonial Resistance Movements, the Ashanti War of Resistance provided inspiration for Nationalists like Dr Kwame Nkrumah which eventually led to the Independence of Ghana in 1957…Perhaps the reason Ghana was the first independent Country in Africa is a testament to the undying pride instilled by the History and Legacy of the Ashanti Empire, and the bitter War of resistance that it took to dismantle it.

The conquest of the Ashanti is perhaps one of the prime examples of how Colonialism undermined African development as has been argued in works like Walter Rodney’s How Europe Underdeveloped Africa.