Whilst credit is due to Alexander for his accomplishments, the role Ancient Religious belief played in the relationship between the conquests of Alexander The Great And The Ancient Alien Anunnaki Kingdoms he conquered does not seem to be explored.

In order to fully explore and understand the link between Alexander The Great And The Anunnaki Ancient Alien Gods, we must consider Alexander’s career in light of the prevailing Religious beliefs of the time.

Alexander III was born in Pella, Macedonia, in 356 B.C and according to legend,  he was the Son of Zeus, Ruler of the Greek Pantheon of Gods.

The fact that Alexander was thought to be the Son of Zeus is often underplayed as ‘myth’.

Whilst we will never know for certain whether he was indeed the Son of Zeus, the lineage is important because it attempts to give Alexander the status of a demi-God.

As we have shown previously in Anuunaki Divine Kingship, when the Anunnaki decided to gift Civilization to mankind, the first Kings such as Gilgamesh, Noah and Sargon of Akkad were off-spring of the Anunnaki and human consorts.

It is this class of demi-Gods that were entrusted with ruling mankind within the Anunnaki Kingdoms of Ancient times, and Alexander’s claim to be the Son of Zeus can be understood as an attempt to claim a legitimacy derived from this ancient form of Divine Kingship.

It has been postulated that the Greek Pantheon of Gods was derived from the original Anunnaki Pantheon.

It is simply the names of the Gods that were changed.

For instance, there were 12 Chief Gods on Mt Olympus, and similarly the Anunnaki Pantheon was made up of 12 Supreme Gods.

The Anunnaki Gods of Greek Mythology then form the basis for the link between Alexander The Great And The Sumerian Anunnaki Gods.

Alexander continued Macedonia’s ambitious march against the Persians that had been begun by his Father, Phillip.

What is interesting to note in Alexander’s conquests is the effort to which he went to reclaim the Ancient Anunnaki Kingdoms…Prior to marching on Egypt for instance, he is reported to have consulted with the Oracle of Amun Ra (The Silent One) whom we know as Marduk from the God Kings Of Ancient Egypt series.

It is said the Oracle gave Alexander the blessing to conquer Egypt which he reportedly did in the name of Ra (Marduk).

As he finally settled in Babylon as King of Persia, Alexander sought to communicate that in the tradition of the Ancient Sumerian Kings, he too was a demi-God placed in the position of Ruler by the Olden Sumerian Gods, the original Rulers of the lands over which he now reigned as King.

The same motivation may also explain his motivations for the conquest of Egypt.

Some historians say Alexander died of malaria or other natural causes; others believe he was poisoned. Either way, he never named a successor. His death and the bloody infighting for control that happened afterwards unraveled the empire he’d fought so hard to create.

The disintegration of his Empire into the divided nations that exist today is supposed to have been foretold in a dream by King Nebuchadnezzar as recorded in the Old Testament’s Book of Daniel. 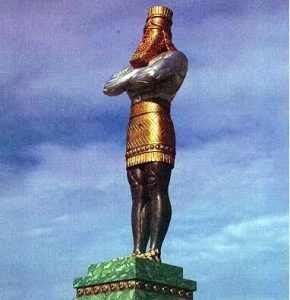 
In the final analysis, Alexander’s claim to be a demi-God may have been a form of well constructed Ancient propaganda that appealed to the Ancients who were familiar with the Ancient History of the Elohim Ancient Alien Gods that once ruled the Earth and brought Divine Kingship to mankind.

Alexander’s attempts to represent himself as a descendant of the Anunnaki Gods by claiming to be the Son of Zeus can therefore be understood as a confirmation of the Ancient world’s understanding of the true origins of mankind, civilization and Kingship.

Whether or not Alexander truly was the Son of Zeus no longer matters, but the importance he gave to perpetuating that perception and portraying himself in that image raises may emphasize the role of the Anunnaki in the affairs of mankind in the olden days.

In Anunnaki Gods of Ancient Greece, the connection between the Sumerian and Greek Pantheons is explored.