In Afropunk: The Movie, we get insight into the History, ideas and rise of Afropunk through interviews and anecdotes given by Afropunks themselves.

The Roots Of Afropunk

What emerges from the interviews is a portrait of alienated Black individuals who initially found a home in Punk Rock subculture.

We find people who due to their personality, experiences and life circumstances, identified with ideas, culture and forms of expression outside the mainstream Black American subcultures such as Hip Hop.

A significant number although not all, grew up as Middle Class Americans with a different experience from the majority of Black Americans from an early age.

However, as Blacks they still felt like outsiders in both mainstream Middle America and Black Subcultures.

In essence, Punk Rock subculture was perhaps the only established alternative subculture within which they could be immediately understood and accepted as Black people who thought and acted differently.

On this level, Afropunk may be understood simply as referring to Blacks in Punk Rock Subculture.

However, the need for Black Punks to be understood and appreciated as Blacks within a predominantly White Punk Rock Subculture led to further introspection and the need to be part of a movement that embraced their ‘Weirdness’ as well as their ‘Blackness’.

The Rise Of Afropunk Beyond Punk Rock

Afropunk was ultimately born of the need to accommodate Black Punks who found themselves as outsiders once again in a world they had initially assumed would fully accommodate them.

Punk Rock could not fully accommodate their angst as Black people, and so Afropunk was born to give full expression to the total sense of alienation felt by the ‘Black Outsider’ or ‘Outcast’.

Negative feelings of alienation were not the only catalyst for the Birth of Afropunk as the positive desire of Black Punks to explore and embrace their identity and History as Black people also formed part of the Afropunk Zeitgeist.

At this point, Afropunk begins to represent a positive sense of being rooted in both ‘Otherness’ and Cultural Pride. 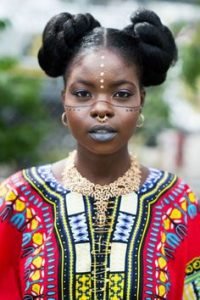 The Future Of Afropunk & Afrofuturism

Both Afropunk and Afrofuturism appear to be modern paths to Black self-definition and inspiration.

They have borrowed from the motifs of the Western Culture in which they were irreversibly immersed to craft a progressive Black identity that challenges the traditional expectations and typical ‘Boxes’ that other Black people and Society at large impose on Africans both at home and in the diaspora.

Afropunk and Afrofuturism are thus vehicles for re-imagining Black identity, and our Afrofuturism Archive articles examine the impact of the Psychological trauma arising out of the dislocation and alienation created by Slavery, and how Africans in the diaspora have combined the Science Fiction Motifs of Western Culture with an African aesthetic in an effort to reconnect with and re-imagine their African identity.

This is an ongoing process with its benefits, but it also suffers from the inherent limitations imposed by the lack of an actual African experience, making the conversation on modern African self-definition in a global cultural context one of the most important and exciting today.

In the meantime, you can check out Afropunk.com for more on the Afropunk scene, and Afropunk: The Movie below…Hope to attend the Afropunk Festival one day.