In 1908, WEB Du Bois wrote Princess Steel, a short story in which an African-American Sociologist creates a device enabling him to transcend time and space. He finds a kidnapped African Princess made from steel separated from her mother.

This short story can be interpreted  as a metaphor for the sense of Cultural alienation and dislocation caused by Slavery.

It seems inescapable that the origins of Afrofuturism lie in the sense of Cultural alienation from within the African diaspora.

From this perspective, Afrofuturism may be defined as an effort to reconstruct a new Black identity within the inescapable framework of a fundamentally Western Cultural experience.

Afrofuturism is therefore not the product of direct African Cultural experience, but can be understood as an effort to reclaim the self-esteem that would have been ingrained by possessing the imagined African identity that could have potentially emerged from an African Cultural experience uninterrupted by the Cultural alienation and dislocation occasioned primarily by Slavery.

The negative effect of Slavery on Black Self-esteem has been explored extensively, and in Willie L Morrow’s, 400 Years Without A Comb, the concept of Black beauty that arose during Slavery in which natural ‘nappy’ hair was viewed as ‘ugly’ is a simple and effective example of the negative Psychological effects of Slavery on the Black Psyche or as Morrow terms it, the ‘inferiority seed’ that was implanted which Afrofuturism seeks to uproot.

One of the implications of the origins of Afrofuturism is therefore that in reclaiming lost identity and self-esteem within the context of Cultural dislocation, at the outset, Afrofuturism’s outlook and motifs naturally and invariably emerged out of the actual Cultural experience of its alienated Creators i.e. African-Americans experiencing Western Culture by virtue of the inescapable inertia of Historical events.

A manifestation of this phenomenon is perhaps the use of Western Industrial technological Motifs in combination with African aesthetics in the conception and creation of Afrofuturist expression…This is natural and hardly surprising.

In my view, the overall intent of Afrofuturism is to address the interruption in the process of Black identity formation resulting from the violent Cultural dislocation caused by Slavery.

For this reason, an integration of Afrofuturism rooted in the diaspora Cultural experience of alienation with an Afrofuturist outlook based primarily on the African experience may result in Afrofuturist expression that encompasses the current Universe of the contemporary Black experience. 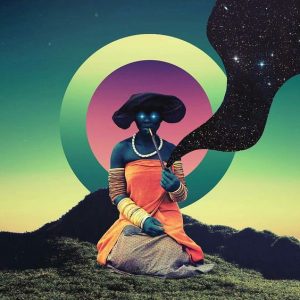 Ultimately whether such a strict distinction actually exists between ‘Diaspora’ and ‘African’ Afrofuturism is a matter of interpretation.

Nevertheless, if Afrofuturism is a Cultural mechanism for reclaiming Black Self esteem, then it may be helpful for it to transcend its origins in alienation in order that it may base its claims to contemporary Black self-esteem and identity from both the reservoirs of African Cultural alienation and African Cultural experience because both can contribute in equal measure.

Before being uprooted by Slavery and experiencing its negative Psychological effects, Slaves belonged to some of the most glorious African Empires that were eventually destroyed by Colonial Conquestâ€¦Check out our entry on some of these great Pre-Colonial African Kingdoms and the Anti-Colonial resistance Wars they fought in order to preserve the identity and self-esteem that was eventually destroyed by Slavery and Colonial Conquest.

Afrofuturism 2.0 The Rise Of Astro Blackness also explores the origins of Afrofuturism and the re-invention of Black Identity.

The video discussion below captures Afrofuturism’s potential to provide a basis for Cultural autonomy and synthesis through Pan-Africanism.