The fact that Ancient Egypt was ruled by Black Pharaohs should not be surprising since Egypt’s First Dynasty was created by Pre-Colonial Southern Nubian Africans of the Nile Valley Kemetic Civilization Culture known as Ethiopians or the people with burnt faces by the Ancient Greeks.

The Black Pharaoh Narmer or ‘Menes’, which means “he who endures” ushered in Egypt’s First Golden Age when he created the Old Kingdom by initiating the annexation of Northern Egypt from the South thereby uniting Upper and Lower Egypt to create the Egypt’s First Dynasty circa 3 000 BC.

According to Chiekh Anta Diop in Civilization Or Barbarism, the first Black Pharaoh Narmer originally ruled over the Southern Upper Nome of Thinis from where he led a coalition of leaders known as the “Thinite Confederacy’’ which subsequently conquered and combined all the Nomes or Cities of Upper and Northern Lower Egypt into one United Kingdom.

Menes then created the First Dynasty of Ancient Egypt by declaring himself the first Ruler of all the Nile Valley lands in the Nomes between Upper and Lower Egypt which would then become known as Chem or Kemet.

Narmer’s creation of Egypt’s First Dynasty is captured on the Narmer Palette.

The Black Pharaohs of Egypt’s Old Kingdom which lasted from the First-Sixth Dynasties split Egypt into Southern and Northern Regions known as Upper and Lower Kemet.

According to Dr Yosef Ben Jochannan in Africa: Mother of Western Civilization,  Upper Kemet (Upper Egypt) was in the African interior beginning in the Sudan area of the 2nd Cataract of the Nile, with Lower Kemet (Lower Egypt) starting at the Nile Delta all they way up to the Border with the Mediterranean Sea. 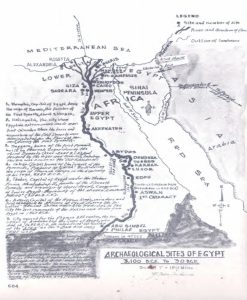 Lower Egypt was also close to Asia, and was the first to experience the influence of Asians, Arabs and Mediterranean Europeans who came into contact with the Black people of Lower Egypt through established Trade links which probably existed during the Ancient Ethiopian Empire.

The Black Pharaohs who ruled Ancient Egypt ushered in the First Golden Age of the Old Kingdom known as The Pyramid Age of Ancient Egypt which saw the construction of the Pyramids.

In time, the decline of the rule of the Black Pharaohs during the Old Kingdom would be caused by the constant infiltration of Lower Egypt from Asia and the Mediterranean coupled with internal conflicts within Egypt iself over the sole right of the Pharaoh to the Afterlife which saw the people rebel against the Egyptian Monarchy in the world’s first big revolution known as the Ausarian (Osirian) Revolution.

According to Chiekh Anta Diop, The decline of the Black Pharaohs that ruled Egypt during the Old Kingdom in the aftermath of the Osirian Revolution marked the end of Egypt’s First Golden Age.

They were many notable Black Pharaohs who ruled during Egypt’s Second Golden Age in the Middle Kingdom era that began with Mentuhotep II’s 12th Dynasty.

Mentuhotep II himself is clearly depicted as a Black Pharaoh in Official Statues.

As a result, its been suggested that the 12th and 13th Dynasties like Senusret III consisted of Black Pharaohs that ruled Egypt during the Middle Kingdom.

One of the most significant contributions made by the Black Pharaohs who ruled Egypt during the Middle Kingdom 12th and 13th Dynasties was the construction of The Karnak Temple Complex.

The Black Pharaohs continued to rule Egypt exclusively until 1650 BCE when the Hyksos from Asia invaded and conquered Egypt which resulted in a period of cultural decline and the Second Intermediate Period.

Black Pharaohs Who Ruled Egypt  Dynasties In The New Kingdom

After driving out the Hyksos, the Black Pharaohs ruled Egypt once again and ushered in Egypt’s Third Golden Age known as the New Kingdom.

Again, they were many notable Black Pharaohs ruling Egypt during the New Kingdom which  began with Ahmose I’s 18th Dynasty.

Ahmose I instituted the return of the rule of the Black Pharaohs in Egypt by repelling the Hyksos from the Nile River delta and regaining control of the South.

Egypt reached the height of its powers both domestically and internationally during the reign of the Black Pharaohs that ruled Egypt in the New Kingdom era.

These famous Black Pharaohs of Egypt include Hatshepsut, Tutankhamen, Ramses II, and Akhenaten.

The rule of the Black Pharaohs in Egypt during the New Kingdom ended with the death of Ramses XI which led to the Third Intermediate Period under Libyan Rule from the 22nd to the 23rd Dynasty until the Nubian King Piye reconquered Egypt and re-established Egyptian rule by the Black Pharaohs from Nubia during the 24th-25th Dynasties.

After the fall of the 25th Dynasty Egypt the reign of the Black Pharaohs ended as Egypt came under permanent foreign rule first by the Persians then the Greeks under the Ptolemaic Dynasty until its last Ptolemaic Queen Cleopatra was deposed by the Romans.

Ancient Egypt was ruled by of Black Pharaohs throughout during the Old, Middle and New Kingdoms.

According to Chiekh Anta Diop in Civilization Or Barbarism, each Golden Age in the Old, Middle and Kingdoms marked a period of High Egyptian Culture because the Black Pharaohs of the Black Dynasties that created the Old, Middle and New Kingdoms revived the respect for Egypt’s Ancient authentic Culture like the Memphite Theology from the Shabaka Stone which came from the earliest days of the people of Nubia in the Southern Kingdom of Ta-Seti that they revered as their place of origin by calling it Ta-Neter (Land Of The Gods).

This Pre-Dynastic period which gradually progressed into the rule of the Black Pharaohs in Ancient Egypt is known as the Naqada Culture.

In Africa’s Egypt, Dr Yosef Ben Jochannan takes you on a breathtaking tour of the Ancient Egypt that was ruled by the Black Pharaohs.

0 replies on “The Black Pharaohs That Ruled Ancient Egypt”