According to Dr. V. Anamali, the roots of the Indian Hindu Caste System lie in the discrimination against the Black Dravidian people of Ancient India after the Aryan conquest of the Ancient Indus Valley Civilisation also called Mohenjo-Daro and Harappa or Harappan Civilization

Dr Anamali suggests that the Harrapan Civilization was created by Black people from Africa’s Kingdom of Ancient Ethiopia dating back possibly to 7,000 BC called the Dravidians.

These Black Dravidians of Ancient India created a highly advanced Civilization in the Indus Valley region which included agriculture, building and sanitation systems.

The Ancient Black Dravidian Civilization of the Africans of Ancient India was very productive, abundant and peaceful.

However from about 5000 BC small groups of Nomads from the Mediterranean started coming into the Region of Harappa and Mohenjo-Daro in the area around modern day Pakistan.

The infilitration into the territorry of the Black Dravidians of Ancient India continued until during the period between 3,000 – 2,000 BC nomadic White Aryans from Central Asia arrived in the Indus Valley in search of food.

The Aryans had already domesticated horses by this time, and in an effort to overcome the scarcity of food and general harsher life conditions they had experienced in Asia, they raided and conquered the Dravidians who were a settled population that was less familiar with warfare and had also not domesticated the horse.

The result was a mixed society comprised of people with varying degrees of Skin tone.

After the Aryans conquered the Black Dravidians, they started dividing the mixed population into different groups with the highest group being the ‘purest’ White followed by 4 other lower groups each ‘classified’ in accordance with how close to White their Skin tone was.

Positions, Jobs and Trades were thus organised according to Skin colour with the purest colour White having access to the highest positions right down to the last rank reserved for those with the darkest Skin tone who were the Black Dravidians.

These Vedas are the source for the rituals and teachings of the Priests of the Vedic religion created by the Aryans which formed the basis of the Hindu Caste system which discriminated against the Black Dravidians.

In Brief, the 5 Castes created by the Aryans to discriminate against the Black Dravidians were:

The Aryan Whites called themselves Brahmins.

In the Vedas Brahma is the Creator God, so the White Aryans likened themselves to Brahma.

The Priesthood and Teaching professions were their sole preserve. 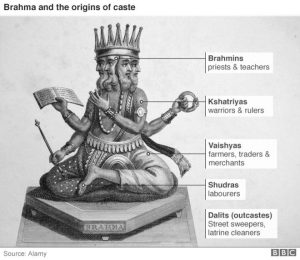 The next 4 Levels down to the last level 5 of the Dalits or Outcasts were all assigned occupations according to how close to Aryan White their Skin tone was with the darkest Black Dravidians placed at the bottom.

Castes were Hereditary, and so occupations and social status were all inherited and most members of the last 3 Castes regarded as service and labour providers as well as Artisans were initially made up of non-Aryans who had been integrated into Aryan Vedic society.

The lowest Caste called the Outcasts or Untouchables made up of the Black Dravidians performed the most unpleasant work such as running the cemeteries, general sanitation as well as tanning and dyeing leather.

In addition to defining people’s occupations, the Castes also placed limits on people’s freedom of choice when it came to marriage because of the strict marriage restrictions and rules of the Caste system which only permitted Marriage between members of the same Caste.