African contributions to Civilization since the age of African Aniquity can be found in Science, Mathematics and Culture which show the Historical relationship between Africa and Civilization in the world before the Slave Trade and Colonisation.

Civilization is defined as the ‘process by which a society or place reaches an advanced stage of social and cultural development and organization’.

We can see the connection between Africa and Civilization in these 10 African contributions to world Civilization:

The first African contribution to civilization which shows the historical relationship between Africa and Civilization is in exploration.

Africans were the first humans and without their spirit of exploration, the Planet would not have been populated.

All of humanity is in debt to the pioneering force of Ancient Grimaldi Africans who ventured from the African hinterland to the rest of the world starting with Egypt’s Nile Valley after the desertification of the Sahara.

In addition, the entire Human Population carries the African Genes and evolutionary instincts gained from life on the African Plains.

Hieroglyphs are the second to demonstrate that African Civilization goes back to the most Ancient times in the form of the Kemetic Civilization with its origins in the Ta-Seti Culture.

According to Historian Dr Theophile Obenga, the origins of writing in the world can be traced to 3 400 BC when the Pre-Dynastic Nubians of Egypt  of the Ta-Seti Culture who developed the world’s first known script called the Medu (Metu) Neter Hieroglyphic script which predates Sumerian Cuneiform Scipt.

The Egyptian Hieroglyphic Writing invented by the Africans of Pre-Dynastic Egypt is the foundation of world Civilization because all major written scripts like Hebrew, Greek, Latin and Phoenician were all derived from Egyptian writing.

We can only wonder whether world Civilization would have been possible or at what stage it would have occured if the Africans of Pre-Dynastic Egypt had not contributed to Civilization by inventing writing circa 3 400 BC.

According to Chiekh Anta Diop in Civilization Or Barbarism, the world’s first Genius Polymath, Imhotep the African was recognised as the original Father of Medicine by the Ancient Greeks.

In-fact, the Hippocratic Oath taken by Doctors today is of Greek origin and is actually borrowed from the first original Ancient Egyptian Oath Of Imhotep.

Egyptian Medicine was very advanced even including Brain Surgery, and many Doctors in the Ancient World, most notably the Greeks, got their Medical Training in Egypt.

Civilization in Africa is also evident in the field of mathematics.

The oldest known mathematical tool in human history is the IShango bone dating to around 8,500 BC.

The Ishango bone has been regarded as a mathematical object made from the fibula of a Baboon.

It has a series of tally marks used for counting along its length which were used to perform simple mathematical procedures.

It was found in the Congo Region in 1960, and is displayed in the Royal Institute for Natural Sciences in Brussels Belgium.

The mathematical calculations based on the Tally Marks had a number of potential uses including basic measurements as well as Astronomical calculations, and it was named after the Django people who inhabited the area in which it was discovered.

According to Dr Chiekh Anta Diop in Civilization or Barbarism,  Ancient Egypt first developed Mathematics in the Form of Arithmetic, Algebra and Geometry which were used for Engineering purposes like the construction of Pyramids and Temples requiring Mathematical precision.

Mathematical problems Egyptians first solved in this way include calculating the Circumference of a Circle and finding the Value of Phi which were invaluable contributions to modern Civilization.

It was these Scripts that were copied by Greek Mathematicians like Pythagoras and Euclid who did not always credit their Egyptian Sources.

Religion was first developed in Ancient Egypt and is more evidence of Africa’s contributions to Civilization.

The Egyptian Funerary Burial Texts inscribed on the walls of the Tombs of the Pharaohs of the Old Kingdom are the oldest known Religious Texts which attest to the idea of an afterlife.

In addition, Ancient Kemet developed the Ausarian Religion which is the first and oldest known Religion with the idea of a Holy Trinity and a Child (Heru aka Horus) Born from an Immaculate Conception of the Union between his Mother, Auset (Isis) and Father, Ausar (Osiris).

Ancient Kemet was also the first to develop the idea of Monotheism based on the idea that everything in the Universe was the Manifestation of the Will of One Genderless Supreme Being experiencing Reality through the different Energies and Forms observed in the Natural world.

The Medu Neter Script which means ‘Words Of Nature'” was developed to teach the Monotheistic Principles of Egyptian Religion that first explained the origin of the Universe using Scientific-Religious Philosophies like the Metu Neter Oracle and the Memphite Theology recorded for posterity in the Shabaka Stone by the 25th Dynasty.

These Religious ideas of One God, a Trinity and Angels (Deities) would influence the later Religions of Civilization starting with Judaism, followed by Christianity and then Islam.

The Metaphoric Nature of Egyptian Religion also explained the natural world in a Scientific way which paved the way for modern Scientific thinking.

For instance, the Shabaka Stone was the first to contain the concept of the Atom as well as the Mathematical Equations that explained the origins of the Universe in the ‘Big Bang’.

Dr Gabriel Oyibo was nominated for a Nobel Peace Prize for explaining the Big Bang Equations contained in Ancient Egypt’s Shabaka Stone and how they solved the problem of a Unified Theory between Quantum and Particle Physics which Einstein died trying to solve.

For this reason Physics and Science are also a major African Contribution to Civilization because Ancient Egyptian Religion aspired to provide a Moral Code and a Cosmology based on a Scientific understanding of the Laws of the Natural Universe which we now call Physics today.

The Age of metals also reveals the contributions of African Civilization.

Besides Iron, one of the most valuable achievements in human history is the creation and manipulation of elements in general exemplefied in the art of metallurgy which comes in as Africa’s sixth contribution to civilization

The Metallurgic sciences have advanced humanity greatly with metals being used for warfare and agriculture.

The Edo people were particularly skilled at the manipulation of Brass and their skills have been immortalised in the famous Benin Bronzes.

Metallurgic Sciences can also be traced to the Ancient Egyptian art of Alchemy which meant the ‘mystery of the Africans of Kemet’ to the Asians and Greeks of the Ancient World when they were first introduced to Metallurgy and Chemistry by the Africans of Kemet who used it to manipulate metal and make chemical compounds in a manner completely unknown to Asians and Greeks at the time.

Thus Chiekh Anta Diop suggests that the modern word “Çhemistry” has its roots in the Black Civilization of Ancient Kemet (Egypt) because it essentially means ‘the Kemetian Art’ if we were to use a modern day translation.

The seventh African contribution to civilization is in the field of Astronomy.

The early Nubian Africans of Nabta Playa who created the First Dynasty of Egypt are recognised for creating the world’s first Astronomical Observatory with their Rock Calendar older than Britain’s Stonehenge that followed the Sirius Star to detect the Flood Levels of the Nile since at least 7000 BC. 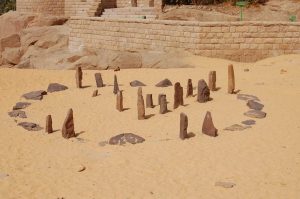 The Dogon people of Mali are also well known for their Ancient Astronomical knowledge based on the Sirius Star Religion of Ancient Egypt. Its been established that the Dogon  were already aware since ancient times that the Sirius system was a Binary Star, together with other information which simply could not be obtained with the naked eye.

The antiquity of Dogon astronomical knowledge is both impressive and mysterious, counting as an  important contribution to human knowledge because the Sirius Dwarf Star was only discovered by Western Astronomers in the 20th Century.

The Dendera Zodiac the world’s first and oldest Zodiac which gave birth to Astrology and was found by Napoleon during his Egyptian campaign in 1798.

The Egyptian Temple at Dendera was used in Ancient Times as the Temple for the Ancient Egyptian Diety Hathor who was originally called Het Heru in Ancient Kemet where she originated prior to the Greek conquest of Egypt.

Its been suggested that the Dendera Zodiac provided the basis for Astrology because it conveys Spiritual concepts based on accurate Astronomical data.

In this respect,  Astrologically, the Dendera Zodiac demonstrates the fundamental Universal Cosmic Law of Correspondence which means ‘As Above so Below’  in important as aspect of Ancient Egyptian Spirituality.

Africa’s other important contribution to Civilization is in the area of Politics because the world’s first Political Revolution occured in Africa.

Ancient Egypt’s Osirian (Ausarian) Revolution which resulted in the rise of the Ausarian Religion is the first Revolution in world History.

The Osirian Revolution occured towards the end of Egypt’s First Golden Pyramid Age also referred to as the Old Kingdom.

The origins and causes of the world’s first Revolution were rooted in the fact that from the days of Pre-Dynastic Egypt and into the Old Kingdom (1st– 6th Kingdoms), only Kings in Egypt were regarded as Divine with the afterlife being the exclusive right of Kings to which Commoners were not entitled.

Another important factor that led to the rise of Osiris (Ausar) and the Osirian Revolution would be the widespread Commoner revolt that occured because of the deterioration in Administrative standards causing widespread inequality and poverty amongst the Egyptian population.

As a result, the people of Ancient Egypt initiated the Osirian Revolt which heightened to become the world’s first Revolution from the 4th to the 6th Dynasties of the Old Kingdom.

In the aftermath of the Ausarian Revolution, the priviledge of Funerary Afterlife Texts intially reserved for the Pharaohs at Tombs like Saqqara were extended through the Ausarian Religion to the ordinary people who also gained the right to the Afterlife when the Pharaohnic Tomb Funerary Texts were converted to Coffin Texts such as the Egyptian Book of the Dead and placed in coffins of ordinary Egyptian Citizens who could now also access the Afterlife like the Pharaohs.

The Ausarian (Osirian) Revolution therefore represents the first Mass Movement Rebellion in world History against any Central authority in the fight for what can best be described as ‘Spiritual Democracy’ because of the importance of Spirituality to the Social Paradigm of the Ancient Egyptians.

Africa’s buildings and monuments stand as witnesses of Civilization in Africa in the field of Architecture in Ancient Times.

The Giza Pyramids from Egypt’s First Golden Age known as the Pyramid Age, are the most recognizable Ancient structure on the Planet, and they were built by the Pharaoh Khufu or Cheops.

In addition, other Africans have contributed unique architecture such as that at Great Zimbabwe which is the largest stone structure South of the Sahara.

The site itself is an architectural marvel considering how it was all built without using mortar to join the stones.

For these reasons, Architecture counts as Africa’s ninth contribution to civilization

An unlikely contribution of African Civilization comes from the fact that Starbucks is in debt to East Africans for the discovery of Coffee as scholars suggest that it was Ethiopians who first recognized the energizing effect of the coffee bean plant.

Today Coffee is an integral part of Humanity’s Economic and Cultural life, and its safe to say the world has Ethiopia to thank for that.

0 replies on “10 African Contributions To Civilization”