The question of the first known inhabitants of the Americas is quite intriguing.

Native American Indians encountered by the first Europeans when they first arrived in the Americas and also during the conquest of Native American Nations in the interior of the American Continent have long been considered as the first Americans, with the presence of Black people in America being largely attributed to the Trans-Atlantic Slave Trade.

However, recent archaeological discoveries and alternative history arguments suggest that the first Americans were Black Aborigines either from Ancient Africa or the Pacific.

From this perspective, the arrival of Black people in America from Africa through Slavery is  a fairly recent additional chapter in the long standing historical interaction Black people have had with the Americas.

The alternative arguments on this issue can be split into:

Alternative Ancient History researchers on the subject of Human Origins and Civilization like Graham Hancock and Zechariah Sitchin agree that the Olmec Civilization of Ancient America was built by Africans.

In the words of Graham Hancock in Fingerprints Of The Gods:

‘My own view is that the Olmec heads present us with physiologically accurate images of real individuals of negroid stock charismatic and powerful African men whose presence in Central America 3000 years ago has not yet been explained by scholars.’

Where, and when the Olec came from continues to generate vigorous debate.

Sitchin specifically contends that the Olmec were Nubian Africans from Egypt who arrived with God Thoth when he left Egypt during what he describes as the 2nd Pyramid War and established the Mesoamerican Civilization as recorded in Sumerian Cuneiform Texts, and the Ancient American Tradition of Quetzalcoatl, the Plumed Serpent God of Ancient American Civilizations like the Aztec and Maya.

Whilst Sitchin’s and Hancock’s Theories are disputed, its interesting to observe that they acknowledge the African presence in Ancient America by linking it to Egypt and Nubia.

Sitchin in particular suggests that the African presence was part of a larger episode in the unacknowledged Ancient Pre-History of Civilization and Mankind. 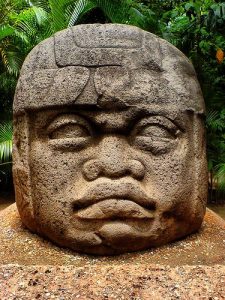 Whilst the arguments made by Alternative Researchers like Sitchin and Hancock provide some basis for explaning the presence of Black people in Ancient America, they are not conclusive, and attempts have been made to locate the Black presence in Ancient America to a more recent era of African Trade with the Americas.

In the book They Came Before Columbus, Dr. Ivan Van Sertima suggests that Kemet-Nubians from the Nile valley and Mende Mandinka people from West Africa sailed from the Nile Valley and West African Coast across the Atlantic to the Americas and founded the Olmec Civilization.

One of the most important connections made to show that the Olmecs were West Africans is the very strong similarities in race between the Olmecs, West Africans and Nubians because Olmec artwork has been found to comprise of West African Motifs.

The Human Basalt Rock Figures that have been found demonstrate clear Black African features and cultural traits like cornrow hairstyles, braids and kinky hair connecting them to West Africa and the Egypt/Sudan region.

The similarities between Olmec and West African civilization includes racial, religious and pyramid building similarities, as well as similarities in alphabets and scripts which also extends to traces of a common spoken Mende language.

Its been suggested that these African Sailors crossed the Atlantic to trade with the Americas during which time they also reached the Pacific Islands, and sailing as far as modern day California. 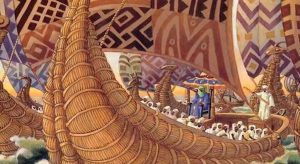 The same Olmec Heads and artefacts found on the American Continent and used to support Sitchin and Hancock’s arguments are also utilised by Dr Ivan van Sertima.

In 1975 the skeleton of a woman nicknamed Luthia dating back 11, 500 years to the Upper Paleolithic period was discovered in Brazil.

Luthia is regarded as the oldest inhabitant of Brazil and some  archaeologists believe that she is evidence of the first wave of Pacific Aborigine immigrants who came to South America by sailing on the Pacific.

Luthia’s face was reconstructed and the conclusion drawn is that she was of Pacific Aborigine descent, suggesting that the first Americans may have been Black Pacific Aborigines before they were replaced by Mongoloid Native American Indians who arrived later on the Continent and made them extinct through violent conquest and intermarriage. 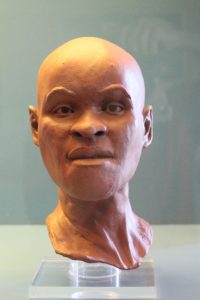 Its likely that by the time Columbus arrived in the Americas, the Continent was already known to and inhabited by people of Black descent and origin.

However, the precise origins and timeline of the Black presence in the Americas still remains to be determined.

Nevertheless, there is evidence available and a wealth of arguments making the case that it may go back as far as a 100 000 years.

Ultimately, whether one adopts the views of Alternative Researchers like Sitchin, Hancock and Dr Ivan Van Sertima, or recent finds in mainstream Archaeology, there is good evidence to conclude that the first inhabitants of America were actually Black Aborigines either from Africa or the Pacific. 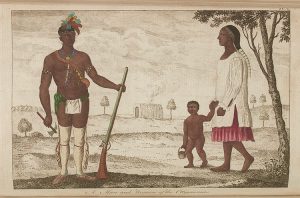 Furthermore, because Black people did not only come to the Americas via the Transatlantic Slave Trade, its possible that a considerable number of Black Americans can also trace their roots to Ancient Africans from the Nile Valley and West Africa who arrived on the American Continent well before the Slave trade was even conceived.

There is also the possibility of Pacific Aborigine roots.

Intermarriage between Black American Aborigines and the Mongoloid Indian Americans that came to dominate the Americas prior to the arrival of Europeans also means that Indian Ancestry may be a part of Black American heritage.

In the final analysis, the question of the first inhabitants of America does not appear settled, but it presents new evidence that shows the true complexity of discerning Black American identity because it cannot just be limited to African Ancestors who arrived on the American Continent during the Trans-Atlantic Slave Trade.

In the documentaries below, Dr Ivan Van Sertima and Sitchin present their arguments for the origins of the Ancient African Olmec Civilization in America, whilst the Home Page Nova Documentary is on the Luthia archaeological find, and what it says about the first Black Aborigine inhabitants of America from the Pacific.

We’ve also compiled a gallery of some Historical images on America’s Black Aborigines.