The Giza Pyramid Complex is defined by outstanding mathematical and astronomical precision.

Whilst Traditional Egyptology credits the Pharaoh Khufu (Cheops) with construction of the complex, in The Orion Mystery, Robert Buaval presents an alternative and compelling interpretation of the Giza Pyramid Complex known as the Giza Pyramid Orion Correlation Theory.

Combined with Zechariah Sitchin’s Ancient Astronaut Theory, it may be possible to link the Giza Pyramids Orion Correlation Theory and the Anunnaki Ancient Aliens based on the Ancient Egyptian Religion as it appears in the Pyramid Texts at Saqqara.

The Giza enigma continues to fascinate independent researchers which has also seen it explored in numerous online documentaries as well as the History Channel Series Ancient Aliens. 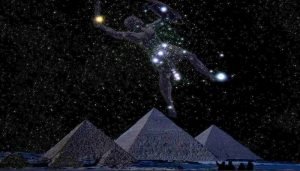 Unlike other Pyramids like the ones at Saqqara, there are no inscriptions inside the Giza Pyramids.

In Buaval’s opinion this is an anomaly and presents a challenge in understanding the purpose of the Giza Pyramid Complex.

The Pyramid Texts found at Saqqara are useful in that they provide us with insight into Ancient Egyptian Religious beliefs that may be useful in understanding the Giza Pyramid Complex.

A portrait of what has been termed an Egyptian ‘Star Religion’ is painted by the Pyramid Texts.

Briefly stated, at the core of Ancient Egyptian Religious beliefs was the concept of the resurrected Pharaoh’s Spiritual journey to the Constellation of Orion to rejoin the Ancestors after completing his sojourn through the underworld or Duat.

In Buaval’s view, its from the Pharaoh’s final destination in the Constellation Of Orion according to the Pyramid Texts that we can get an understanding of the purpose of the Giza Pyramid Complex.

There are 3 main reasons for connecting the Giza Pyramid Complex with the Orion Constellation supporting idea that the Giza Pyramids are a replica of the 3 Stars making up Orion’s Belt.

Firstly, the Pyramids are all pointed towards the Milky Way, the Galaxy in which Orion’s Belt is located.

In addition, the smallest Pyramid of the 3 Pyramids making up the Giza Complex is misaligned in a way that matches the arrangement of the 3 Stars making up the Orion Constellation.

Buaval also questions whether its mere coincidence that the Giza Pyramid Complex and the Sphinx would have been aligned with Orion’s Belt in 10, 450 BC.

Last but not least, is the question of the unexplained Pyramid Shafts which coincidentally all point in the direction of Orion.

All in all, this set of coincidences suggests that the Pyramid Complex was constructed as a Projection Portal for the Pharaoh’s Soul to the home of the Ancestors in the Orion Constellation as stated in the most Ancient Egyptian Religious Texts found in the Pyramid Texts at Saqqara.

On this basis, it would seem more plausible to regard the Pyramids as a functional replica of the Pharaoh’s Ancestral Home in the 3 stars of Orion’s belt rather than a symbol meant only to celebrate the Pharaoh’s Imperial Majesty.

The Orion Correlation Theory is not accepted by mainstream Archaeology, and the arguments against it which you can read here, include the suggestion that the Pyramids are actually properly aligned and not misaligned to mirror the 3 stars of Orion’s Belt as suggested by Buaval.

Nevertheless, in The Orion Mystery we are presented with an alternative interpretation that appears to tie in the loose ends in ways in which the mainstream view does not.

Furthermore, given that Buaval’s interpretation is based on the Pyramid Texts which Sitchin has argued in the Earth Chronicles as a re-telling of the actual story of the Pre-History Of The Gods Of Ancient Egypt, then the origins of the Egyptian belief in the Pharaoh’s resurrection and afterlife journey to Orion can be understood from Osiris’ resurrection by Isis during the First Egyptian Pyramid War. 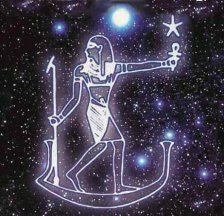 Buaval’s account therefore enables an understanding of the Giza Pyramid Complex that is consistent with the as yet unacknowledged Pre-History of Egypt in which the Anunnaki Ancient Alien Gods ruled but which is presently treated as mythological.

You can also check out the Revelation of the Pyramids Documentary.

The House Of Saud