The Mwari Council Dare was held in the Council Chamber hidden in a deep Ancient Cave whose location was known only to members of the Akan.

A Triangle of Waterfalls all poured their waters from the top of the sacred mountain into a Circular Canal at the centre of the Cave, and around the Canal a thick, natural raised Circular Limestone Platform located at the epicentre of the Cave was formed.

The Dare Council Members sat in a Circle of 7 around a wooden fire, and the Cave was lit with a delicate combination of natural sunlight and flame torches as in the olden days before the arrival of the Juluka.

Menelik was a descendant of the Mwari Cult Akan Dynasty that had ruled Planet Kingu before the Juluka Conquest.

The Mwari Cult were a Priestly Clan that had used a combination of Military force and Astrology to unify the Kingu Tribes into a single Akan Nation before the arrival of the Juluka. Their Dynasty had barely survived the Juluka Conquest, with Menelik emerging as the strongest leader in recent memory.

A tall, muscular well built man donning a crop of dark, mature and flourishing dreadlocks, Menelik was both regal and imposing.

There were rumors that his hazel eyes which were uncommon amongst the Akan were proof that he was a Demi-God, having been born of the union between his mother and Akan Chief Priestess Ishta, with the Chief Male deity of the Akan, Hanumann.

“At this rate I’ll have to carry you”, Menelik teased Nongqawuse as she struggled to navigate in the thick brush coupled with the possibility that she may at any time slip and fall to certain death on the moss covered stepping stones.

“Not all of us have the slight advantage of being born Demi-Gods you know”, she responded curtly.

“Sure, if that makes you feel better”, Menelik responded with muffled laughter.

“Here, grab my hand”, Menelik said as he held at an outretched arm, which Nongqawuse observed indifferently.

“Look, I know you don’t need my help with this, but time is of the essence right now”, Menelik continued with slight irritation in his voice.

“As long as you realise that I can handle this little mountain myself”, Nonqawuse eventually replied grabbing hold of his arm.

Menelik pulled her up firmly and carried her the rest of the way, leaving Nongqawuse with little choice in the matter despite her apparent reluctance.

They continued without incident, and soon they could observe the torch flames and smoke around the Dare Council.

They looked at each other apprehensively as Menelik approached the edge of the watery canal around the meeting Platform, and after placing Nonqawuse gently on her feet, he announced their arrival by shouting the Ancient Password:  “!Khwa ttu”.

The Canal waters parted instantly, opening a path for Menelik and Nonqawuse to cross over to the main Platform where the Mwari Cult Dare Council was already gathered in waiting.

Menelik took his place as the 7th member of the Council whilst Nonqawuse sat behind Ishta.

The Council was made up of 4 Women and 3 Men including Menelik.

Ishta stood up to address the Council as the other members remained seated.

Due to the Cybernertic enhancements using Juluka technology performed on her over the years, her original face was barely recognisable.

She no longer had any hair, plus the colour had been drained from her skin, and what was left was an ashen coloured slender body frame and a head with 3 blue Cybernetic eyes with an assortment of Data Ports for data transmissions, downloads, uploads and mainframe link ups.

“We are all aware that our people lost to the Juluka at the battle of Maji Maji Station because our weapons were inferior to those of the Juluka. 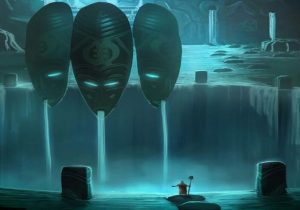 The Ancient Knowledge and Prophecies were impotent in the face of the Juluka War Machine.

As a result, we were humiliated and since then have been collaborating with the Juluka in the oppression of our own people.

Its only been through this deception that we were able to gain the trust of the Juluka so we could understand their ways, and most importantly their technology.

We have waited patiently once again for a sign from the Gods, and finally the Stars are aligned.

This time we will confront the Juluka with their own weapons because we have managed to replicate the Synthetic Life Technology they haved developed and used it to create Synthetic Super Warriors of our own.

However, our Army like every other Army needs a leader.

We have identified a leader amongst the people in the Citadel, and we are making sure he will come to join us soon.

We tasked Nonqawuse with making first contact and she’s here to give us her report”.

She turned her unnerving gaze to Nonqawuse who stood up apprehensively to address the Council.

“Yes its true that I have initiated contact with the Elected.

The Citadel is riddled with anxiety and tension because the people are without a Shepherd.

However, Wise Elders, I am concerned at the methods we are using to accomplish our task for are we not resorting to the same vile technological tools of the Juluka that have corrupted and brought misery to the Federation?

Are we not usurping the powers of the Olden Gods and manipulating the sacred Mind and Soul?”

They were murmurs across the room until Ifaenyi, leader of the male faction of the Council spoke out.

“Who are we to dare to even imagine we can comprehend what the Olden Gods want and what they do not?

All we know is that the Juluka are a curse unto this land, and we must do all we can to expel them.

In defeat, we bid our time, and ingratiated ourselves to them so we could learn their ways and understand where went wrong.

Now that we have built an Army using their Knowledge, for the first time, the Celestial signs have been aligned.

If this is not a sign from the Olden Gods, I do not see what else could be.

I say we forge ahead.”

Ishta stood up and addressed the Council.

“So it is agreed that we continue with the plan to implant the Mahdi Consciousness into the Elected.

My Son, Menelik and Nonqawuse will ensure that everything goes according to plan.

And you, young Maiden are reminded to use your liberty to speak before this Council wisely, we should not have to remind you to know your place.”

Menelik and Nonqawuse exchanged glances as the procession of Elders departed the Council Chamber.