The discovery of the Egyptian Pyramid Texts at Saqqara brought to light some of the most Ancient written records of mankind’s Religious belief.

In particular, the Pyramid Texts provide a window into Ancient Egyptians’ understanding of their own History and Cosmology raising the possibility that the First Gods of Egypt recorded in the Pyramid Texts were actually Ancient Alien Anunnaki Gods.

Egyptian History In The Pyramid Texts

According to the Pyramid Texts, Egypt’s History can be traced to an era of Gods who reigned for about 17 500 years before the first Human Pharaoh, Menes.

From the Rule of Menes, conventional Egyptian History has been divided into a series of Kingdoms from the Early Dynastic to the Graeco-Roman period.

Egyptian History from the era of Menes to the Graeco-Roman period is accepted as Historical fact. 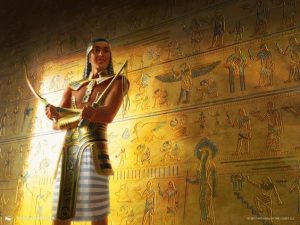 Nevertheless, it has been suggested that the Ancient Egyptians themselves regarded a preceding era of the Gods as Historical fact, and mystery continues to surround whether the era of Gods depicted in the Pyramid Texts is pure Myth or actual Historical fact.

The Era Of The Gods In Ancient Egyptian History

The era of The Gods in Ancient Egypt in the Pyramid Texts begins with Ptah who following the Great Deluge of antiquity, forged the Kingdom of the Nile Valley by carrying out Dyking works that raised mounds of Earth from the post-deluge marshes.

Ptah was succeeded by Ra who then fathered Osiris and Seth.

The conflict between Seth and Osiris which Zechariah Sitchin has described as the First Anunnaki Egyptian Pyramid War led to the death of Osiris, the birth of Horus and the reign of Horus over Upper and Lower Egypt as recorded in the Pyramid Texts.

Horus’ reign was followed by a series of God-Kings until the reign of Menes, the first Human Pharaoh marking the start of the early Dynastic period.

Both the Pyramid Texts and the most Ancient Egyptian Cult Centre at Heliopolis which was named by Herodotus in the Grace-Roman period provide some interesting insights on the possible Historicity of the era of Gods in Ancient Egypt.

Mainstream History as well as independent researchers like Robert Bauval in The Orion Mystery, and Zechariah Sitchin in The Earth Chronicles agree that the Ancient Egyptian name of the most sacred Egyptian Cult Centre at Heliopolis was Annu.

At Annu, the first Obelisk was erected, and it was capped with the Ben Ben Stone which according to tradition had come aboard the Sky Boat of Ra in the earliest days of Ancient Egypt.

In addition, the Pyramid Texts record the journey of Ptah to Egypt which is corroborated by the Sumerian record in the events following the Great deluge.

The Sumerian record’s account of the division of the Earth into 4 Regions after the Flood, one of which was in the Nile Valley and awarded to Anunnaki God Enki, would explain the origins of Ancient Egypt in Ptah’s journey and dyking works in Ancient Egypt as recorded in the Pyramid Texts.

Moreover, the Seth and Osiris conflict leading to Horus’ reign can also be used to understand the role of the King in Egyptian Cosmology.

In Egyptian Cosmology, the Pharaoh was regarded as the actual living God Osiris, who upon his death would journey to rejoin the other Gods at Home in the Constellation Of Orion.

For this reason, the role of the Orion Constellation in Egyptian Cosmology is important in understanding the construction of the Pyramids. 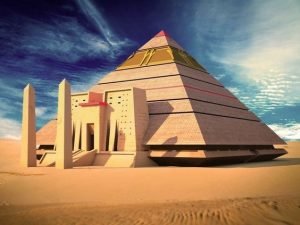 The tradition of mummification stems from the initial mummification and resurrection of Osiris by Isis after he was killed by Seth in the events of the First Pyramid War recorded in the Pyramid Texts, which according to Zechariah Sitchin are actually a record of the Anunnaki conflicts in the Nile Valley for control of the Giza Spaceport that had been rebuilt at Giza following the destruction of the first Spaceport in Sumer during the great deluge.

As such, the Pyramid Texts read together with the Sumerian record suggest that there is some basis for considering the era of the Gods in Ancient Egypt as possible fact and not pure myth.

Annu, the Ancient Egyptian name of the first and most important Egyptian Cult Centre at Heliopolis bears such a close resemblance to Anu the Supreme Sumerian God, and the Anunnaki his representatives on Earth, that it may provide some credibility for the links Sitchin and others have made between the era of the Gods in Ancient Egypt and events in Sumer which are reflected in the early tradition at Heliopolis and in the Pyramid Texts.

Whether the era of the Gods of Ancient Egypt is myth or Historical fact is an enigma.

However, this enigma may possibly be resolved and explained by referencing back to Sumer.

This may possibly raise the Pyramid Texts to a factual account of Egyptian Prehistory in a preceding era of the Gods rather than a pure mythological foundation for Egyptian Religion and Cosmology for the Pharaonic Osiris Myth of Divine Kingship in Ancient Egypt.

Nevertheless, opinions in both mainstream and a significant number of independent researchers do not link the Prehistory of Egypt with the activity of the Anunnaki in Sumer, preferring to treat the Pyramid Text inscriptions as a basis for understanding Egyptian Religion as mythology and the Osiris myth rather than as an account of actual Ancient Egyptian Pre-History.

The featured documentary is an interesting discussion of the mythological aspect of the Pyramid Text account of the origins of Ancient Egypt as well as the contending of Seth, Osiris and Horus.