Cleopatra’s romance with legendary Roman Generals Julius Ceasar and later on Mark Anthony propelled her onto the world stage, and without doubt contributed significantly to her legend. 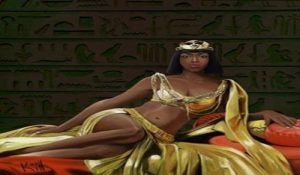 However, despite these much publicised forays and intrigues with Rome on the world stage, we are left to imagine what Cleopatra represented to her own countrymen.

How did she relate to her Native Egyptian people? She was after all, an Egyptian Queen before becoming Ceasar’s companion.

This aspect of what I can best describe as Cleopatra’s domestic policy is what I found most interesting about Cleopatra’s legacy.

In 956 AD, the Scholar Al Masudi described Cleopatra in the following terms : ‘She was a sage, a Philosopher who elevated the ranks of Scholars and enjoyed their company. She wrote books on Medicine, charms and cosmetics in addition to many other books ascribed to her known by those that practice medicine”.

One of the hallmarks of Cleoptara’s reign is a domestic policy that was sensitive to the needs of the poorest Egyptians and the State institutions such as the Temples.

For instance, in times of drought when the Nile did not flood and Egypt did not experience a good harvest, she reduced the grain Tax burden on Egyptian Peasants to make sure they had enough food. She also strove to maintain the Nile River irrigation system and infrastructure to ensure that the production of grain and food could always be kept optimal.

I was really impressed by Cleopatra’s domestic policy because it became clear to me that despite her antics on the world stage, her primary concern was Egypt and its people.

It is this “Oneness” with the people that appears lacking in Africa and its leaders today.

Our leaders in Africa today seem to excel at separating themselves from those they claim to represent and from whom their mandate to govern springs.

Corruption and poverty has become the lot of most African nations primarily because our leaders have separated themselves from us.

This is why they can build themselves lavish mansions, go on expensive holidays, spend massive amounts of money in useless consumer goods like expensive watches, shoes, clothes, cars etc while the majority of the population continues to wallow in abject poverty.

They simply do not regard our suffering as a reflection of their own suffering.

This basic but significant transformation in the collective Psyche of the African Body Politic is needed more than ever in order for Africa to lift itself from poverty to face the challenges presented by Globalisation and the New World Order agenda.

This is not to say that our leaders have been completely lacking and devoid of this spirit of Unity.

In recent times, we have seen slivers and glimpses in leaders such as Patrice Lumumba, Kwame Nkrumah, Nelson Mandela and others. In more ancient times, leaders like Shaka and Samouri Toure exemplified this ideal.

As a result, they were able to mobilise the population and create States with enduring legacies.

However, the spirit of separation has come to dominate our African leaders with Dictators like Mobutu, Abacha, Mugabe, Idi Amin amongst others running amok.

Beyond the extremes demonstrated by outright Dictatorships, most African States are in-fact Kleptocracies where the ruling Parties and their cronies essentially utilise the State as a means of enriching themselves whilst maintaining the illusion of democratic rule by holding period elections.

I personally find Kleptocracies more sinister than Dictatorships because of the Democratic mask they wear in order to conceal their real character as Organised Crime structures.

All in all, it is important for our leaders to feel as though our future is entwined with theirs if their policies are to ever truly reflect the needs of the people they claim to govern.

The importance of Unity with the People, is ultimately what I took away from my journey into Cleopatra and her world.

Therefore, in remembering Cleopatra, Egypt’s last Pharaoh, let us remember her as the Uniting African woman and leader she really was.

For more on the Ancient Kingdoms and Empires of Pre-Colonial Africa, you can check out the article archive on the links below: