Whilst most people probably associate Satanism and Luciferaniasm with the macabre, the public personas and exhibitionist antics of infamous Occultists like Aleister Crowley have also not done much to encourage the understanding of the secrets or principles of Satanism and/or Luciferaniasm.

Nevertheless, the followers of these Occult doctrines regard them as positive philosophies that if properly understood can unlock true human potential through higher level Consciousness.

The Origins Of Luciferianism

Helena Petrovna Blavatsky was a Russian occultist, spirit medium, and author who co-founded the Theosophical Society in 1875.

She developed an interest in Western esotericism during her teenage years.

According to her claims, in 1849 she embarked on a series of world travels, visiting Europe, the Americas, and India. She alleged that during this period she encountered a group of spiritual adepts, the “Masters of the Ancient Wisdom”.

She proclaimed that Theosophy was simply reviving an “Ancient Wisdom” which underlay all the world’s religions and she was the first Westerner to officially convert to Buddhism in India in 1880.

Later, she published ‘The Secret Doctrine’, a commentary on what she claimed were ancient Tibetan manuscripts delivered to her by the Ancient Spirit Masters.

The reference to Lucifer or Satan as a Harbinger of Light can be understood from the Biblical Garden of Eden incident in which the Serpent persuaded Man to Eat the forbidden fruit so he could become self-aware.

According to Luciferaniasm, this enlightened Man was superior to the ignorant automaton version of Man whose consciousness had not been awoken.

In awekening Mankind’s Consciousness, Lucifer therefore is really a Messenger and bringer of Light to Mankind rather than the evil Angel responsible for Mankind’s fall.

Luciferaniasm therefore portrays itself as a rejection of the ignorant man unaware of his full potential.

The Fallen Angel or Serpent of the Bible is therefore not Mankind’s enemy, but Mankind’s greatest ally because he opened his eyes when God would not.

The role of the Fallen Angels or Nephilim in Mankind’s Ancient History is controversial.

Whilst Luciferians regard the Fallen Angels as bearers of Light, Gnostic Teachings such as those contained in the Nag Hammadi Scrolls and Book Of Enoch suggest the opposite.

In the Gnostic Teachings, the Fallen Angels or Nephilim corrupted Mankind by imparting forbidden knowledge including the arts of War and Magic as part of the Culture that arose to form ‘Civilization’ beginning in Ancient Sumer and introduced by the Demi-Urge Anunnaki.

In Gnostic understanding, the teaching of these arts or knowledge was not sanctioned by The Most High.

As such, according to Gnostic Teachings, Lucifer or Satan is actually the creator of a deceptive alternative Reality Matrix against the will of the ‘True’ God and is not Mankind’s friend.

In the final analysis, if there really is a Cosmic conflict between Lucifer and The Most High, then it seems as if Mankind is caught in the midst of a War between the Gods, and is not really in a position to judge which of them is better and who to believe.

These are Higher dimension entities that can essentially tell Humans whatever they wish to be believed according to their own agenda, and Mankind really has no way of determining who is the true ally.

The term ‘New Age’ is derived from Ancient Astrology, and refers to a period of time defined as an ‘Astrological Age’.

There are twelve Astrological Ages corresponding to the twelve signs of the Zodiac, and Astrologers claim movement of the Astrological Ages parallels major changes in the development of Earth’s inhabitants, particularly relating to Consciousness in culture and society. 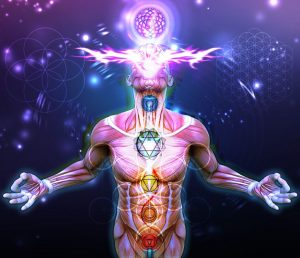 The length of one cycle of twelve ages is 25,860 years after which a New Age under a new Zodiac sign is initiated.

In our era, the ‘New Age’ will be under the sign of Aquarius,  ‘The Waterbearer’.

Its been suggested that the arrival of this New Age will usher in a new era of Human Consciousness and Higher Self-awareness.

It would seem that Transhumanism is the next logical step in the Luciferian concept of Human evolution as Human Consciousness explores new frontiers by escaping the limitations of the Human body after the Singularity.

The public perception of Satanist and Luciferean leaders like Aleister Crowley has ensured that the Occult secrets of Satanism and Luciferianism are reviled without being understood.

Nevertheless, even when we try and understand the Luciferian doctrine, we are presented with an Ancient Occult Philosophy that takes the opposite side in a familiar Ancient Cosmic War story of the Gods.

Ultimately, Luciferiniasm and/or Satanism draws attention by taking the unpopular side of the Rebel in a Cosmic drama of duality.

However, the consequences of the Luciferian doctrine are worth paying attention to as technological advances approach new heights.

There exists a threat that an agenda to integrate Human-Machine Consciousness may be presented as an elevation of Human Consciousness cast in Techno-Religious terms rooted in Ancient Astrological concepts linked to the “New Age’ and Luciferian ideas of proceeding along the next stage to enlightenment since Man ate the forbidden fruit in the Garden Of Eden.

The Book Of Enoch