Picasso is my favourite Artist.

There’s just something fundamentally perceptive in Picasso’s Art on the elusive nature of Structure, Form and Reality itself.

His Art is as Real as much as it is Unreal, bearing witness to the dream nature of the reality we assume to be so structured in our everyday Consciousness.

So it also came as a pleasant surprise when I discovered that Picasso was  inspired by West-African Masks and Sculptures during one of the most creative periods of his life which he called his “periode nègre” (Black/African) period.

The Influence Of West African Art On Modern Art

Like all great Artists, Picasso was determined to give expression to his authentic inner voice. 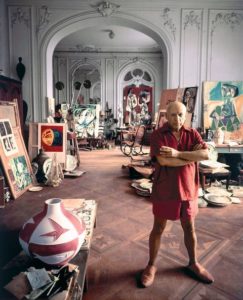 The abstract Cubist shapes prominent in West African Art would give birth to Modern Art as Artists like Picasso felt inspired.

Drawn to the abstract spirituality of West African Art, European Artists had found an avenue to transcend the strict naturalist boundaries imposed by earlier Renaissance Art.

Picasso’s talent lay in his ability to identify, absorb and use the universal Human Spirit wherever he could find it in his own Art.

This is the same spirit that has driven sampling in Hip Hop since its inception.

In the final analysis, African Art’s influence on Picasso and Modern Art particularly the Cubist movement cannot be denied, and its clear that the distant Village voices of  Ancient Africa’s brilliant Artists have continued to echo from Africa all the way to the Galleries of the modern World through the works of Picasso and others they influenced.

The motifs and style of Traditional West African Art were able to transcend the borders of Space and Time at least in part because the Art in some way appealed to universal archetypes embedded in our collective Unconscious.

The power of West African Art in itself also stands as a testament to the state of African Civilization which was able produce Culture capable of global appeal.

A Nominees shortlist was recently announced by the African Speculative Fiction Society, and you can view it by visiting the Society’s Website here.

My personal favourite from the list is Eru, a unique graphic novel which I can only describe as a combination of ‘Dracula’, ‘Underworld’ and African Spiritual mythology.

You can download it free courtesy of Comic Republic here.

Lets support Africa’s modern day Futurists because if the impact of traditional West African Art in the past is anything to go by, then their potential to influence the World today and in the future is immeasurable.

In the History of Modern Art, the influence of African Art on Modernist Artists like Picasso is discussed.

Ancient Alien Wars: The Anunnaki Of Ancient Egypt & Mesopotamia In The Battle Of Kadesh