In Warrior Women Of The Ancient world, we explored the legacy of some of Ancient History’s most memorable Warrior Women with outstanding Military achievements. Since August is women’s month, we’ve done this entry on Warrior Women of the Modern World.

Today, Film and Television provide us with a modern dose of female Warriors that fit the Ancient mould.

Representing today’s Warrior women is this list of some of the modern world’s notable Lady Ninjas from the world of Film and Television:

Michelle Yeoh
Born in Malaysia, Michelle shot to stardom through her roles in 1990s Hong Kong movies which led to her most recognisable roles in James Bond, Tomorrow Never Dies and Crouching Tiger Hidden Dragon.

Famous for doing her own stunts, she was ranked the greatest action heroine of all time in 2008.

She still racks in the Beauty awards after being voted one of the 50 Most Beautiful People in the world and one of the 35 All Time Screen Beauties by People Magazine.

Its not a surprise seeing that she won the Miss Malaysia Pageant at 20.

After moving to Hollywood in the late 1990s she landed major roles, most notably Pearl Harbour in 2001.

However, it was in her role as Selene in the UnderWorld Film Series that she came into her own.

She has since become a Household name, known primarily for her action movies.

Sonja Sohn
Most famous for her role as the hard hitting Detective Kima Greggs in The Wire, Sonja Sohn is a Georgia Native of mixed Black and Korean Heritage.

Starting out as a Slam Poet, Sonja made her transition to Film and Television after her role in the film Slam which she co-wrote won her critical acclaim and awards recognition. 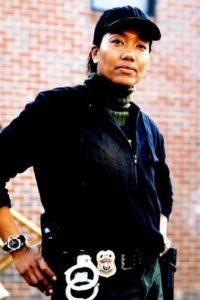 She was outstanding in her role as Detective Greggs in The Wire, and she has continued doing activist work within the Baltimore Community after the last Season of The Wire wrapped.

Michelle Rodriguez
An outstanding breakout performance in Girlfight earned Michelle Rodriguez recognition, awards and a role in the The Fast and The Furious which has since become one of Hollywood’s biggest Franchises.

I was personally impressed by her roles in S.W.A.T. and Lost.

Born in San Antonio Texas to a Dominican Mother and a Puerto Rican Father, her childhood and Teenage years were quite eventful after she was expelled from more than one School, and later dropped out of High School.

She later graduated from High School and after giving business school a try, she decided that acting was her true calling…The rest as they say is History.

We’re certainly grateful she listened to her inner voice.

Although today’s Warrior Lady Ninjas exist in Film and Television, they are more than just a fantasy.

They continue to resonate because their appeal is rooted in the Woman Warrior Archetype which forms part of our collective Human memory because of the role strong women have always played in shaping our collective History in every part of the World since Ancient times.

Lets continue to celebrate women and the role they’ve played in History as we end off the tribute with the classic Cynthia Rothrock flick ‘No Retreat No Surrender’.

Ancient Alien Wars: The Anunnaki Of Ancient Egypt & Mesopotamia In The Battle Of Kadesh