‘Cheesy’ probably describes what comes to mind for most people when you mention Disco today.

However, the genius and Cultural importance of Disco may lie in how it was able to bring about a Social Revolution in the disguise of what seemed to be nothing more than a frivolous and sometimes hedonistic diversion.

The Secret Disco Revolution explores the history and cultural impact of Disco, and in the process demonstrates Disco’s importance to the evolution of Culture in the late 20th Century.

The Birth Of Disco

Disillusionment following the Vietnam War coupled with Industrial decline particularly in the Motor Industry as well as Race Conflicts linked to the Civil Rights Movement brought a Malaise to late 1960s America that had not been experienced since the end of World War 2.

Nowhere was this dejection more pronounced than in late 1960s New York which was at the point of bankruptcy.

Crime, drugs and prostitution were rampant, and it seemed like the City leadership had no solution.

It was within this environment that various Counter Cultures would emerge in response to these conditions, one of which would come to be known as Disco.

The seedy nightclub New York scene would provide fertile ground for this new music to find its audience and gain a foothold in New York nightlife.

Key to Disco’s success was the Cultural diversity of the Gay, Feminist and Multi-Racial audience itself, that up until that time had remained largely hidden from view.

They were part of a subculture whose idiosyncrasies were not part of mainstream America…Disco would be their bridge, and in the process it would usher in a Social Revolution that would transform Society and Culture permanently.

Rise Of The Rejects

The Secret Disco Revolution sums up Disco as a tool for the liberation of Women, Blacks and Gays.

This goes straight to the heart of Disco’s success as a movement for the disenfranchised.

Music, Fashion and Politics all converged on the Dancefloor, giving expression to the Zeitgeist that had emerged out of the negative conditions of late 1960s America.

Underground Club Disco Anthems began to take over mainstream Radio. This also revolutionized the music industry, Radio and the way Music was sold and marketed.

As Disco’s Cultural impact swelled, it demanded an even bigger stage as the seedy nightclubs in which it had been birthed were no longer adequate…The result was a new glamarous and hedonistic Club Culture best epotimised by Studio 54.

In the meantime, even the mainstream could no longer resist Disco’s charm and Hollywood responded to Disco’s call by releasing the Disco themed classic Saturday Night Fever. 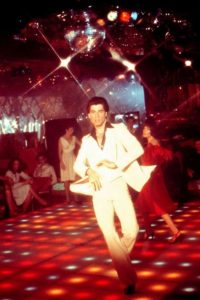 The Decline Of Disco

From the mid-1970s, Disco started to become a victim of its own success.

Its acceptance into the mainstream had watered down its revolutionary spirit and the creativity of Artists and Producers who now made more formulaic Pop records in order to gaurantee Chart success.

Within a short 3 years Disco had changed from being the voice of the untouchables, to the sound of Burger King commercials.

In the end, Disco only burnt brightest for about 3 years before disappearing from the mainstream. Nevertheless, the impact of the silent Social Revolution it enacted on the dancefloor remains with us today.

In addition, Disco also introduced Production techniques that still form the foundation of EDM and Pop Music Production today. Last but not least, the legacy of Clubs like Studio 54 also contributed to nightlife Culture as we know it to  today.

In Studio 54: Behind The Scenes, we get a glimpse into the hedonism and madness of the Disco era.