Pre-Colonial Africa was a place of many Epics, and one of the most well known is the Epic Of Sundiata Keita, the Founding Epic of Ancient Mali which has been transmitted for centuries through the Ancient Griot Oral Tradition.


Unlike the Sumerian and Greek Epics like Homer’s The Iliad and The Odyssey which were written, in Africa, an Oral Tradition was used to preserve the Epics.

The choice of an Oral Tradition was deliberate because writing was already in use in Mali at the time the Epic of Sundiata originated in the 13th Century.

It was thought the use of the Oral Tradition as told by the Ancient Griots or Keepers of History was a more effective means of preserving and communicating the national mythos because it kept the story more alive  than if it was transmitted in written form.

For this reason, the Epic Of Sundiata was transmitted by Oral Tradition.

Sundiata was the Son of Maghan Kon Fatta, King of the City of Niani.

His Father received a Prophecy foretelling that he will one day father a Great Ruler by conceiving a Child with an ugly woman. Soon after, two hunters brought him an offering of an ugly woman to take as his Wife.

Recognizing her as the woman from the Prophecy, the King accepts the offering of the maiden Sogolon, and takes her as his Wife…Sundiata is conceived from this union.

Sundiata is born crippled and only manages to walk at the age of 7. In addition, his Father’s first Wife does her best to undermine Sundiata’s claims to the Throne in favour of her own Son.

After the King’s death, the eldest Son Dankaran Touman, is installed King, sending Sundiata and Sogolon into exile for seven years.

While in exile Sundiata is raised by Moussa Tounkara who inaugurates him in the Art of War and prepares him to take the throne.

In the meantime, the evil King Soumaoro Kante is besieging the Cities of Mali and when Nani falls to him, a search party is dispatched to find Sundiata.

Sundiata forms alliances with all the cities he sojourned during his exile and raises an army that defeats Soumaoro Kante, and founds the Mali Empire.

His reign is regarded is the beginning of the Golden Age of Mali. 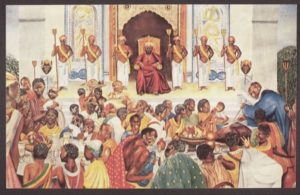 The Epic Of Sundiata follows the mould of the mythological Hero’s journey who goes through trials and tribulations until his moment of triumph found in Joseph Cambell’s ‘The Hero With A Thousand Faces’.

It’s a Mythological Archetype that has found expression throughout history from the Epic Of Gilgamesh right through to Luke Skywalker In Star Wars, the modern mythological Epic of our era which follows the same template.

The fact that Sundiata’s Epic was preserved Orally is perhaps why it is not so widely known and as well preserved.

Nevertheless, it should be remembered that this was a deliberate choice based on what was understood as the most effective means of transmitting the story without losing its meaning and vitality in translation.

Therefore, if Culture is the hallmark of Civilization as it was for the Sumerians, Greeks, Romans and others throughout history, then the Epic Of Sundiata demonstrates that Civilization already existed in Pre-Colonial Africa from as far back as the 13th Century, and Africa was far from the ‘Dark Continent’ portrayed in Colonial Propaganda.

The Oral History Of The Mali Empire lecture provides great insight into the Griot Oral Tradition of Ancient Mali  as well as more detail on the Epic Of Sundiata.

For on the Ancient Kingdoms of Pre-Colonial Africa, you can check out the archives below: