Gods Of Juluka is an attempt at an Afrofuturist work that discusses Colonialism as well as current debates on Human Origins and Globalization.

Its the first book in the Kingu Chronicles on events on Planet Kingu from the year 2134 according to our time.

Planet Kingu is home to the Akan people who have built a Galactic Empire that runs on the Cosmic Wave Technology introduced by the Juluka Gods who Colonised and ‘Civilized’ the Planet.

We’ll be posting it Chapter by Chapter as it gets completed and hope you’ll enjoy it.

The Images used have been taken online and are not official artwork approved by the Image Creators.

The Cerebral Surge transmitted by the Implant reminded him he was running out of time to make it to work at the Citadel Complex.

After the Great Catastrophe, the Kingu Government became obsessed with record-keeping, and as a Scribe he was lucky to have one of the good jobs still available on Planet Kingu.

So despite his reluctance to leave his family on his off day, he knew had to go to work. They were many Kingu Citizens who would kill to be in his position, and the Ruling Savants wouldn’t hesitate to replace him the moment they questioned his loyalty.

He seldom liked leaving the comfort of his modest 3 Bedroom Apartment on the 123rd floor of Building 6960 which was kitted out with all the modern conveniences including a wall Crystal Display Visual Monitor, rare Bom Skin Couches and off-course a Nitrogen Fridge to keep his favourite Brew cold.

His Wife was pleased with the Lapis Lazuli Kitchen finishes imported from Planet Bolo, but by far, the most important element in this little picture was his family.

A Bio-energy surge from the Implant took care of breakfast, and it was time to go.

He kissed Sikatele his voluptuous, gentle Wife goodbye as she rolled over in bed, and after tiptoeing into his daughter Runya’s room, he gently kissed her forehead, and she acknowledged the gesture with a sleepy dimpled smile as she hugged her favourite stuffed Doodoo toy modelled on a colourful Bird found on Kingu.

Tall, with a slightly athletic build, and a face that belied his age, Tindo prepared to Teleport to the Citadel, and after accessing the Citadel Grid, his Cerebral Implant was coded with a Teleportation Sequence in exchange for some Citadel Credits.

Soon after, another Cerebral transmission showed he was running low on Credits.

Thankfully, his account would be Credited again soon after the remaining few cycles of Mbire, Planet Kingu’s main Moon. 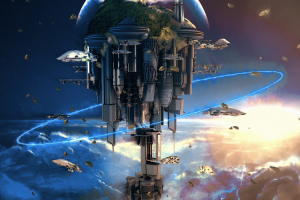 His thoughts strayed as he initiated the Teleportation sequence, reminding himself of how lucky he was to serve as a Kingu Public Servant.

His home Planet Kingu was part of the Bulawayo Star System in the Constellation of Zwide.

Kingu’s main Star was Meroe which it Orbited once every 500 Mbire Cycles.

According to Citadel Records, Planet Kingu was about 100 000 Mbire Cycles Old, and had been settled by his people, the Akan for about 50 000 Mbire Cycles, although it was not exactly known how the Akan had arrived on Kingu.

The Akan were a copper hue skinned people, and since arriving on Kingu, they had built an impressive Empire with the knowledge passed onto them by the Juluka who were supposed to have landed on Kingu about 20 000 Mbire Cycles ago while they were on a Space Exploration mission.

They found the environment on Kingu hospitable, and decided to found a settlement.

Initially starting out as a Space refreshment Post for other Juluka Ships on different Space exploratory missions, the Kingu Station became more important to the Juluka, and it was decided to make the Settlement on Kingu more permanent.

Since the Juluka had landed on Kingu, the Akan had been very receptive and established cordial relations with them.

Whilst the Akan were not as technologically advanced as the Juluka, trade relations had developed between the Akan and the Juluka who relied on the Akan to supply them with the goods needed for the refreshment Station to supply incoming Juluka Ships.

After the discovery of massive Zig Ore deposits on Kingu and the surrounding Planets, the Juluka decided to make their presence on Kingu more permanent, and a decision was made to develop Kingu with the help of the Akan.

However, the limited technical advancement of the Akan required the Juluka to implement a solution that would raise the technical knowledge of the inhabitants of Kingu and the surrounding Planets so they could be provided with the necessary skills and knowledge to develop the entire Star system by mining the Zig Ore and extracting Wave Pulse Energy from it on various Extraction facilities in what would become the Kingu Federation.

The Juluka requested volunteers from the Akan to come to their Base Station to receive the necessary training.

After about 200 Mbire Cycles, a group of Akan Savants emerged from the Juluka Base Station to teach the Akan the knowledge required to develop Kingu into a modern Galactic Empire.

The project had been successful, and for the past 10 000 Mbire Cycles, the fate of the Akan had been tied to the Juluka who steadily took control of Kingu which they now ruled through the Mambos, a group of Rulers installed by the Juluka who together with the Savants now mediated between the people and the Juluka.

The Kingu Empire was made up of 10 Floating Stone City State Federations, each ruled by its own Mambo Dynasty.

Tindo was in the service of the Kingu Mambo Dynasty at the Citadel Complex which was central to every main Planetary City in the Federation.

Kingu ran on the Cosmic Wave Technology introduced by the Juluka and taught to the Savants, and in each Kingu Federation City, the Capitals were filled with massive Holograms of the Juluka Gods reminding Citizens of the Kingu Federation of who had brought them progress.

He had been raised to believe that it was his duty to show his gratitude to the Juluka by being a loyal servant of the Kingu Mambo Dynasty, and so Tindo was determined to make it to work on time.

He took a deep breath as he initiated the Teleportation sequence to make his way to work at the Citadel Complex, as his thoughts vanished like an elusive mist. 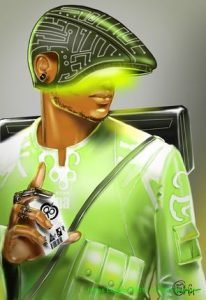