Chapter 2 of the Gods Of Juluka, the first entry in the Kingu Chronicles takes us into the heart of Planet Kingu’s central Civil Administration Building, The Citadel.

In case you missed it, the updated version of Chapter 1 is available here.

Once again the images are not authorised official Art, and credit goes to Men Of Color in Fantasy Art and Deviant Art.

Like a slur, Dimpo’s words slowly registered as he stepped out of the Teleportation capsule.

The senses always needed time to adjust following a teleportation jump, and after a few moments he could now muster a response.

“Morning to you too. I see you’ve been holding down the fort in my absence. Sometimes I wonder when the Savants will realise that I’m not needed here” he teased.

The Citadel Complex Administration Control Room was a brightly lit kaleidoscope of colours coming mainly from the glass wall Mainframe screen which dominated the room.

They were three workstations in the control room for him, and his two assistants, Dimpo and Juju each with its separate Crystal Display Monitor. 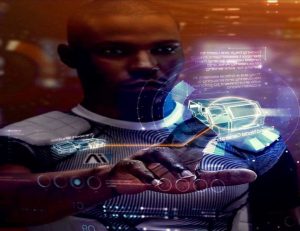 Dimpo was a tall, perky but authoritative skinny, fair skinned female Immigrant with bright green eyes from Eya, one of the main Planets of the Kingu Confederation, and she was one of his most reliable Team Members.

Despite the regimental system of the Savants, Tindo tried as best as he could to maintain an informal work atmosphere in his Citadel Team.

“I thought I should you bring you up to speed on the latest figures from the Zig Ore Mines, Extraction Reactors and Temple Mind Scans.”

“Sureâ”, he replied trying to sound authoritative and only slightly impressed.

They headed over to the Citadel Mainframe where the wall screen showed the latest figures from the Zig Ore Mines, Output from the Extraction Reactors and a list of flagged Kingu Confederation Citizens whose Mind Scans had shown an aberration pattern on their last Temple Worship Visit.

The data showed that there was a decrease in the Zig Ore output and an increase in Mind aberration patterns of people whose Minds could not be reprogrammed to Worship the new Juluka King, Lord Bindu at the last few Temple Rituals.

“Nothing too unusual”, Tindo observed with a feigned air of indifference concealing concern.

“But there’s been an increase in the aberration reports coupled with lower output on the Zig Mines”. Dimpo interjected.

He’d obviously observed this trend too, but did not want to openly acknowledge it to Dimpo.

The issue would surely be coming up as part of the scheduled Status Report Meeting he would be having with the Savants later today which would also be attended by the Temple Engineers and representatives of the Mambo’s Court.

He decided to change the subject.

“Any word yet on our applications to be elevated to Temple Engineers and join the league of the Savants?”

A cynical voice retorted, “I doubt that will be going anywhere. They’ll never accept us and believe we’re capable of the responsibility despite the fact that this place would practically fall apart without us”.

It was Juju, who despite his cynical attitude was vital to the Team. He was a Kingu Citizen with a round handsome face punctuated with beady observant eyes and a short, stocky build.

His good looks seemed to defy all odds, perhaps that’s why he was so cynical because he always had to fight somehow for the good in him to be acknowledged.

Then again, maybe he wasn’t cynical but was the only realist amongst them.

For now, Tindo chose to be optimistic and confidently dismissed Juju’s assessment despite his own wariness.

Look, this is the first time Kingu Citizens have even been considered for elevation. Its never happened before so it’ll probably take some time. They could have just chosen to not even accept our applications you know!”

“Its just a charade to keep us in check if you ask me.

Anyway, its not over till the Supernova explodes I suppose, but I’m not keeping my hopes up” was Juju’s frank assessment.

“I’ve uploaded the latest Status Report to your Cerebral Implant. Can I send our report to the Savants now?” Dimpo intervened reminding him of the business at hand once again.

“No point in holding back”.

“I’ll see what they have to say about the reduced Zig Ore output and increased aberration patterns. Hopefully they don’t try the lay the blame on us.

You know how the Temple Engineers are always trying to blame everything on us if there’s something wrong with the Mind Scan Psycho-Meme Reports.”

Despite his outward demeanour, inwardly Tind//o: was concerned about the relationship between the reduced Zig Ore Output and Mind Scan aberrations.

For a while now they’d been reports of unrest and dissatisfaction amongst the workers in the various Zig Ore Mines and Extraction Reactor facilities across the 10 Planets of the Kingu Federation.

The Temple Engineers had also recently asked them to update the Temple’s Mind Scan Parameters, and he wondered whether this change had anything to do with the increase in Mind Scan aberration patterns.

Also why had the Kingu Federation Psycho-Meme Map been updated?

Was this somehow linked to reports of the changing of the Guard amongst the Juluka after the Juluka Interstellar War that had led to the rise of a new Regime under Lord Bindu, and so the people now had a new Juluka Lord they needed to be reprogrammed once again to Worship?

How did the people of Kingu and the Federation fit into all this? Maybe some answers would come out of the Status Report Meeting with the Savants.

Secretly he hoped that the acceptance of a Kingu Federation Citizen into the League of Savants would finally enable the Akan and all other people of the Federation Planets to get their voice heard.

The Citadel Credit System also meant that Federation Citizens were completely at the mercy of the Juluka because access to all their basic needs depended on access to the Citadel Grid and the Credits allocated to each Citizen.

A lot of corruption and greed had been spawned as the Temple Engineers and Savants exploited their privileged access to maintain control and exploit the Citizens of the Federation in this system.

Last but not least, the Citizens of Kingu would soon lack any privacy as a system to detect and record “subversive thought patterns” which would be stored on the Central Citadel Mainframe Quantum Computer for further investigation by the Citadel Authority was currently in high priority development.

Luckily, the Savants and Temple Engineers were still working on a prototype of the system, but it was the final frontier.

There was a lot going on in the Kingu Federation but now was not the time to think about it all.

Best to prepare for the Status Report Meeting with the Savants later in the day. 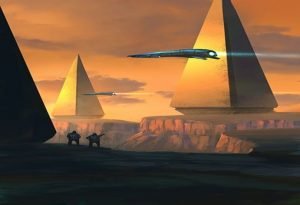 Next Chapter 3: The Savants