The points raised in relation to the Historical errors and sometimes distortions inherent in the Ancient Astronaut Theory on Unexplained Megalithic Structures, Ancient Artifacts and Texts are very effective at explaining the mainstream position.

In doing so, we are provided with a better understanding of the mainstream Historical perspective to consider in coming to grips with the plausibility of the Ancient Astronaut Theory.

In the end, we are made to see that there is less mystery regarding Megalithic Structures, Ancient Artifacts and Texts than the Ancient Astronaut Theory would suggest.

The Archaeological evidence discussed regarding Puma Punku, The Pyramids and Baalbek is quite revealing.

In short, its demonstrated that the Ancient Astronaut Theory rests on a shaky foundation that relies primarily on ignoring the current Archaeological evidence excavated at these sites in a manner that amounts to a distortion of the facts.

For instance, whilst Ancient Aliens claims that the Stones used to construct Puma Punku were made of Diorite and not Sandstone, Archaeological evidence has established that the Site was built using Sandstone.

In addition, the tools required to mould the Sandstone were also excavated on Site and there is therefore no foundation to the Ancient Astronaut Hypothesis and its suggestion that the Site was made of Granite and Diorite stone which must have come from elsewhere and would have been difficult to shape.

The same also goes for the Pyramids of Giza which were made from Granite, a Stone which the Egyptians already had the technology to cut and shape.

With regard to Baalbek, the space platform suggested by Sitchin is not actually part of the foundation of the structure, but was built as a retaining wall to prevent erosion, a standard Roman technique.

Whilst most of the points made regarding the construction of Megalithic structures are sound, the probability that the precise Astronomical alignments of Puma Punku or the Giza Complex is accidental is not really considered or explained.

How the use of a similar Pyramid type construction developed beginning with the Ziggurat in Sumer, Pyramids in Egypt and Stepped Pyramids in Meso-America, different parts of the world that did not supposedly have any contact occured is also not considered.

In addition, its also admitted that the construction method used for building the Egyptian Pyramids has not been determined as the suggested internal ramp method is inadequate.

There is also no discussion or consideration of the Gobleki Tepe site and what its influence or origin could possibly have been.

What is clear however, is that there is less mystery surrounding certain Megalithic structures than the Ancient Astronaut Theory would suggest.

To me this was the most compelling part of Ancient Aliens Debunked.

King Pakalâ€™s Tomb, the NAZCA Lines and Out Of Place Artifacts like the Tolima Fighter Jets are convincingly explained.

The idea that Pakal’s Tomb depicts a Rocket Ship essentially requires one to ignore and adopt a radical unsupported view of the accepted meaning of the Mayan Mythos symbols used on the Tomb which essentially depict the Mayan Tree of Creation and the Serpent Symbols showing the transition of the King from the realm of the living to the Dead in the Underworld.

There is no need to give these symbols any other meaning other than their ordinary meaning in Mayan Mythology other than to give effect to a visual interpretation of the Tomb that is consistent with our own Space-Age culture which is totally divorced from the Cultural context in which the symbols are ordinarily used.

Similarly, the NAZCA lines are not the result of a mountain top being cut off but were instead drawn using simple tools on a natural plateau to depict Gods that were found on the Pottery used by the Native inhabitants of Peru.

The soil in the area is easily disturbed by human interference to reveal a white layer just underneath which once the lines were drawn remained undisturbed by the natural environment in one of the driest parts of the world ensuring the patterns would survive as long as they have to this day.

Similarly, the Tolima Fighter Jets are actually part of a larger collection stylistically depicting animals and other creatures encountered and revered by the people in the natural environment.

Its therefore misleading to present the Tolima Fighter Jets in isolation without showing the entire collection which would put them in context.

Other Out Of Place Artifacts like the Klerksdorp Spheres were not considered or explained.

Nevertheless, once again we are clearly made to see that a significant number of the ‘Out Of Place Artifacts’ ordinarily presented in support of the Ancient Astronaut Theory are presented in a misleadng out of context fashion and do not actually support the Hypothesis.

The works of Zechariah Sitchin are heavily criticised for their mistranslation of the Sumerian Texts as well as his failure to cite the relevant portions of the Sumerian Record he has relied upon for making his assertions throughout the Earth Chronicles Series.

For instance, there is apparently no mention of Gold in the Sumerian Record, and Sitchin is accused of misinterpreting the term Anunnaki which actually only means the Princely Seeds or Children of Anu and not those who from heaven came as Sitchin has argued.

The same goes for the misinterpretation of the Ramayana and Mahabarata epics as evidence of an Ancient Nuclear War between Supernatural Gods with flying Vimanas in the Indus Valley Region under Anunnaki Godess Inanna.

On this aspect, Ancient Aliens Debunked does not address the arguments made by former Vatican Biblical Translator Mauro Biglino that the Ancient Texts on which the Bible is based do in-fact refer to an extraterrestrial Intelligence as Sitchin suggests.

This is particularly important since unlike Sitchin, Mauro Biglino is qualified to interpret the Ancient Text himself.

For instance, it does not explore or see the need to explain how and why the manner in which King Pakal was buried was similar to that of Egyptian Pharaohs even though the Civilizations are treated as separate and isolated.

However, Ancient Aliens Debunked does help us dispense with those elements of the Ancient Astronaut Theory for which there is no support.

What remains is an unexplained mystery of similar Cultures and Architecture across vast distances, precise but unexplained Astronomical alignments, unexplained Sites like Gobleki Tepe and an authoritative interpretation of Ancient Texts by a qualified Translator that confirms an Extraterrestrial presence as suggested by the Ancient Astronaut Hypothesis amongst other unexplained Artifacts.

In the end, the attraction of the Ancient Astronaut Hypothesis lies in its ability to tie these loose ends in what is perhaps an imaginative way at times but that does not actually amount to proof of the theory. 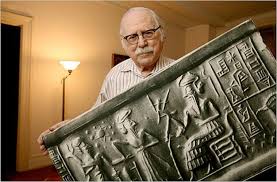 So far, its through the imagination of Sitchin that the unexplained Cultural similarities and apparent anomalies have been connected.

The Ancient Astronaut Theory has not actually been proved yet, but until some of the lingering questions are answered, it will probably serve as an alternative lens for interpreting our past where a lack of conclusive evidence or explanation requires interpretation and at times imagination.

Check out Ancient Aliens Debunked the Website here for the full arguments, and draw your own conclusions.