Art As Propaganda In Ancient Mesopotamia

In Propaganda In Ancient Sumeria, we considered the use of Culture in the form of Epics such as The Epic Of Gilgamesh as a means by which the Anunnaki Gods maintained Mass Social Control through the Ruling King-Priest class of Mesopotamia.

There is presently no consensus on whether the references to the Anunnaki Gods made in Mesopotamian Art and Texts were in relation to actual physical Gods that are said to have been present in Mesopotamian City States as suggested by the Sumerian Texts, or if they were merely a Political Invention used to justify control over the people by the Ruling King-Priest class.

What is clear however is the relationship between Mesopotamian Culture, Religion and Political Power.

These examples of Mesopotamian Art from the successive Mesopotamian States of Sumer, Akkad, Babylon, Assyria and Persia demonstrate this dynamic.

Sumerian Art: The Standard Of Ur

From one of the first Mesopotamian City States of Ur, The Standard of Ur provides us with a glimpse into how Mesopotamian Art and Politics were entwined.

At approximately 4 600 Years Old, it consists of a hollow wooden box covered by a collage of shell, red limestone and lapis lazuli, and can be traced back to the earliest Dynasties of Ur.

Scenes of War and Peace are shown on each side of the box, with the King being the most prominent figure placed in the middle of the mosaic in order to emphasise his importance as Warrior and Provider, as well as being the peopleâ€™s intercessor with the Gods.

In presenting the King as an intermediary between the people and the Gods and not as a Divine God himself, It reflects a particular concept of Sumerian Divine Kingship which would be transformed with the decline of the Sumerians, and the arrival of the Akkadians under Sargon of Akkad.

TheÂ Victory Stele of Naram-Sin is dated around 2254-2218 BC, and is a representation of Akkadian King Naram-Sinâ€™s conquest of the Lullubi people in the Zagros Mountains.

An important distinction from earlier Sumerian Art is the depiction of the King as a Central Divine Figure or God himself through the horned Head dress.

Although the King is depicted showing reverence to other more Superior Gods by gazing at the Stars, the concept of Divine Kingship in Ancient Mesopotamia had now evolved to where the Political elite or King-Priest class are no longer viewed simply as intermediaries, but as lesser Gods with Naram-Sin being amongst the First to be declared Divine. 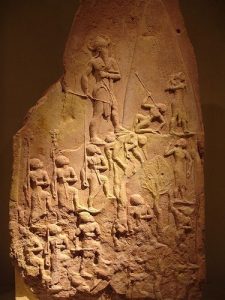 One of the most significant works of Mesopotamian Political Art is the Stele Of Hammurabi.

A Stone Stele of more than 200 Laws and corresponding punishments, Hammurabiâ€™s famous Babylonian Law Code was produced around 1754 BC, and it remains an enduring influence of the Mesopotamian legacy on our Civilization today.

Ideas on Justice and Law Principles first enacted by Hammurabi such as fair treatment of women, the poor and vulnerable still permeate our own Law Codes and Bills of Rights of today.

Significantly, the top of the Stele depicts Hammurabi receiving the Law Code from his Anunnaki God Shamash.

From this we get the sense that it still remained necessary to link or justify the exercise of Political power by means of a Divine mandate. 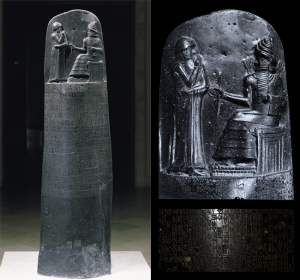 Assyrian Art emphasised the virility of the King as the source and symbol of the Nationâ€™s strength and sustenance.

Raised Stone reliefs designed to achieve a 3-D effect depicted action sequence narratives that demonstrated the Power of the monarchy.

In this sense, Assyrian Kingship was more centralised around the person of the King with lesser emphasis being placed on the Gods. 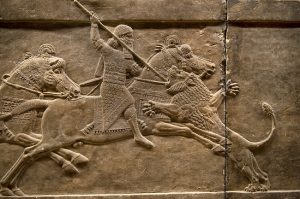 Before its destruction in 330 BC by Alexander The Great, the Persian Empire founded by Cyrus The Great was the most prominent in Mesopotamia.

Characterised by a culture of tolerance and integration of the conquered, the Art displayed at the Persian Capital of Persepolis Â emphasised the allegiance of the diverse Cultures that made up the Empire to the King.

Works such as the famous Tribute scene depict foreigners in different dress from various parts of the Persian Empire presenting Tribute to the King.

This was ultimately designed to reflect the Empireâ€™s philosophy of Conquest through tolerance and integration which was a new style of Rule in the Region at the time which also further emphasised the importance of the King. 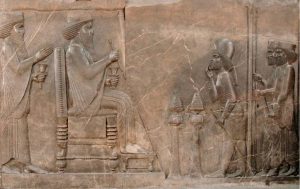 Art in Ancient Mesopotamia was an effective means of reminding the people of their History, Culture and Rulers.

To the Ruling class, it served to constantly justify their dominion over the land and the people.

The claims to Divine mandate may be viewed as literal or simply Political ploys directed at entrenching Political Power by portraying its acquisition and maintenance as â€˜giftsâ€™ bestowed from realms beyond Human influence or control.

According to the Ancient Astronaut Theory, this complex system of Government reflected in Mesopotamian Art was the result of direct intervention and influence of the Anunnaki Gods from the Planet Nibiru as would appear from a plain reading of the Sumerian Texts.

The means to develop and implement such a system would have been contained in the MEs or Templates kept by each Anunnaki City State God that served to also provide guidance and information on such aspects as Temple measurement, as well as the Scientific and Agricultural knowledge required to sustain a Civilization.

MEs may possibly have been commonly depicted as the â€˜hand bagsâ€™ carried by the Ancient Gods in Mesopotamian Art. 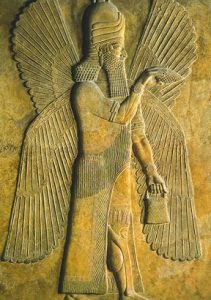 In the documentary Ancient Sumerians we get insight into the Culture and Religious beliefs that bound Ancient Mesopotamia.