In that time, the Sahara has been transformed from Ocean to desert, and has been home to many species of plant and animal life including Stone Age man which have all thrived in the Sahara.

About 40 million years ago, the Northern tip of Africa was submerged in an Ocean.

These Oceanic waters were the home ancient flora and fauna.

Fossils of whales and sea shells discovered in the Sahara from this period suggest that the Sahara formed part of a sea bed.

Then about 3 million years ago, the Ocean water levels fell, and the desert landscape emerged which lasted until 90 000 years ago when a shift in the Earth’s tilt would turn the Sahara green once again.

At this point, great lakes which would later form the great Lakes of East Africa like Lake Tanganyika were formed as the environment also shifted and a Savannah landscape emerged.

This period also marked the establishment of a pattern in the Earthâ€™s tilt that would shift the Sahara Climate from green to desert every 20 000 years, and its also in this period that traces of Cave Paintings by early Hunter Gatherers in the region have been found. 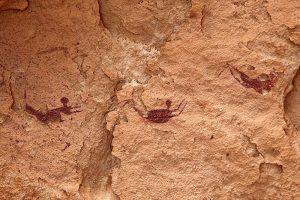 The last 10 000 year cycle in which the Sahara climate shifted resulted in the mass migration of early man from the Sahara region into East, Southern Africa and Europe.

At present, the desert landscape dominates the Sahara region but things may change once again in the next 10 000 years as the Earth’s tilt may make the Sahara green again for another 20 000 years.

Over millions of years the Sahara desert has had many faces, and despite its barrenness today, it has played a significant role in the evolution of the Earth and Mankind.

Its also probably safe to say its role is far from over, and as the African cradle of mankind, it may still have some surprises in store.

For more on the role played by the Sahara desert in the development of Africa from the Stone Age to the Iron Age, you can check out our article archive below:

Who Wrote The Matrix?