The Emergence Of The Bantu People In Africa

Part 1 of the Entire History Of Africa Anthology, climaxed with the evolution of Homo Sapiens and the Hunter Gatherer Society they created.

The introduction of Agriculture and Iron would have a major transformative effect, and would mark the birth of the modern African with the emergence and spread of the Bantu throughout Africa.

The Rise Of Agriculture

Historically, the earliest traces of Agriculture and Iron have been found in the regions of Mesopotamia and the Nile Valley.

These regions were the birthplaces of the Sumerian and Egyptian Civilizations which are the earliest Civilizations known to us to date.

Knowledge of Cereals, Animal Husbandry and Iron Smelting spread into the African interior from Mesopotamia via the Nile Valley into East Africa, the Sahara and then into the African Savannah.

Depending on the climatic conditions, either Crop Farming, Animal Husbandry or both were adopted.

In the Rainforest Equatorial Regions root crops like Yams were predominant, with cereals being more common in East and Southern Africa.

The arrival of Farming coupled with the introduction of Iron Tools had transformed the African interior by around 1200 AD.

This departure from a Nomadic lifestyle would have an impact on Social relationships, organisation and Culture.

The Impact Of Agriculture In Iron Age Africa

Agriculture’s main effect was the emergence of specialization.

It was no longer necessary to allocate all the Labour within Society to Hunting and Gathering as people could be fed from the surplus produced from Farming.

New skills such as Blacksmiths and Traditional Healing emerged, coupled with the blossoming of an early Barter trade economy and Religion.

The Bantu group of Languages also flourished during this period, spreading from the Niger-Congo region all the way down to Southern Africa.

With the formation of a new Society built on Agriculture and Iron, accompanied by a distinctÂ  language coupled with changing Social and Economic relations, the Bantu people had stepped onto the scene, and the modern African had emerged. 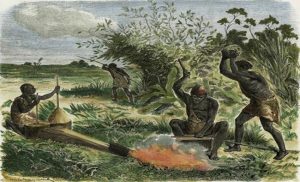 As the Iron Age and Agriculture flourished, relationships based on Kinship, Ethnic and Political identity would coalesce and inform the Bantu Consciousness with concepts of Extended Family, Tribe and Chiefdom that would form the bedrock of Bantu Society.

In time, the new foundations of Bantu Society settled, and strong Political entities emerged in response to the need to negotiate Political Power in order to maintain access to the means of production like land within Iron Age Society.

These new Political entities will be the subject of our next entry in Entire History Of Africa Anthology as we look at the Chiefdoms that dominated the African landscape prior to the Bantu peopleâ€™s contact with external forces that began in the spirit of equal trade partnerships but would eventually lead to the conquest of .

In the meantime, you can check out Dr Kenneth Vickery’s presentation on Iron Age Africa below.

Check out our Article Archive for more on the History of Africa from the Stone Age to the Iron Age as well as the Pre-Colonial Kingdoms of Africa below: