“…all a result of the obvious absence of people of Color in the fictitious past/future-that seeds were planted in the imaginations of countless Black Kids who yearned to see themselves in warp-speed Spaceships too..” (Ytasha L. Womack In “Afrofuturism: The World Of Black Sci-Fi and Fantasy Culture”.)

Thanks to the great people and minds in the Afrofuturism Facebook Group, I’ve been learning more about Afrofuturism courtesy of a reading list I compiled based on member suggestions. 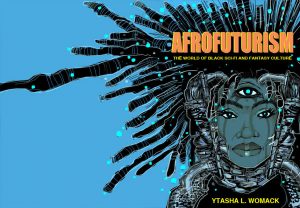 As a result, I discovered Ytasha L. Womack’s “Afrofuturism: The World Of Black Sci-Fi and Fantasy Culture”, which is a very compelling and informative read on the subject.

The above quote is taken from the opening chapter of the Book ‘Evolution of A Space Cadet’ in which she describes her childhood fascination with ‘Star Wars’ expressed in her dressing up as Princess Leia on Halloween. However, due to the absence of substantive Black Characters in Sci-Fi, she always felt the lingering feeling of exclusion because of a lack of representation.

The drive to create Afrofuturist works therefore came at least in part, from the desire to fill the gap of Black representation within Sci-Fi.

To my mind, this raised the question whether Afrofuturism is simply an exercise in filling the Pop Culture gap, or on a more fundamental level, if it is the extension of the struggle for Political integration symbolised by the Civil Rights Movement into the Cultural realm?

There can be no doubt that the problem of Black underepresentation in Sci-Fi is a legitimate cause of concern…Indeed part of Black Panther’s success is that it catered directly to that concern. However, the question remains whether in the final analysis Afrofuturism as it is presently defined and understood amounts to more than a struggle for inclusion within the Framework of established Sci-Fi narratives.

From this perspective, Afrofuturism’s ‘Afro-aesthetic’ is merely a Cultural device for inclusion in the narrative of the broader Culture rather than an effort to redefine it.

In as much as the Civil Rights Movement was a struggle for Political inclusion within the American State, Afrofuturism may be understood as an extension of this same struggle in Popular Culture…As such, it may be possibly contended that Afrofuturism does not in essence seek to re-define Culture, but merely to include Blacks as Participants within this Culture.

Ultimately, if Afrofuturism aspires merely for inclusion, it is in essence an exercise in Cultural assimilation.

Although it may also be said that the mere inclusion of Black people in the Culture is in itself a form of redefinition…In my viewÂ  this is a superficial form of redefinition that does not address aspects such as the issues of concern the genre is utilised as a device to examine.

Notwithstanding the above, in my view Afrofuturism’s potential exceeds the confines of Cultural assimilation.Â

Perhaps its birth was the result of an understandable desire for Cultural inclusion, but its future progression need not be on the same trajectory and may already not be.

Following the success of Black Panther and the stronger foothold Afrofuturism is gaining in Pop Culture, it would perhaps be useful to remember that Afrofuturism’s aspirations should not be limited merely to Cultural inclusion via an Afro-aesthetic guise, but also to actively redefine the underlying narratives and issues within Sci-Fi in order to re-imagine the genre and contribute to its evolution on its own terms.

All in all, Ytasha L. Womack’s “Afrofuturism: The World Of Black Sci-Fi and Fantasy Culture” remains a seminal work on Afrofuturism, and if you havent read it you can get it on Amazon here.

Peep the Dr Reynaldo Anderson discuss Afrofuturism and its possibilities for creating new dimensions and avenues for exploration.

The Nephilim Anunnaki Ancient Aliens Of The Bible